Senior Defensive End One of Five Up for Prestigious National Award 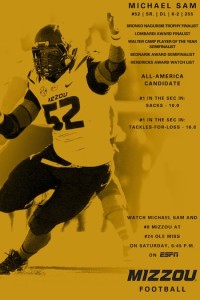 COLUMBIA, Mo. – University of Missouri senior defensive end Michael Sam (Hitchcock, Texas) has been selected as a finalist for the Bronko Nagurski Trophy, as announced early this morning by the Charlotte Touchdown Club.  Sam is one of five standout student-athletes who will vie for the prestigious award, which goes annually to the nation’s best defensive player as voted upon by the Football Writers Association of America (FWAA).

Sam has been a key reason for Mizzou’s surge into the top-10 in 2013, as the Tigers have been one of the top turnaround stories this season.  He currently leads the SEC in both tackles for loss (with 16.0 entering Saturday’s game at #24 Ole Miss), and quarterback sacks (10.0), and he ranks sixth and seventh nationally, respectively, in those categories.

Three times this season, Sam has amassed three sacks in a game, and his 21-yard fumble return for a touchdown at Georgia was a key play which helped spark the Tigers to a huge road between the hedges on Oct. 12th.  His 10 sacks on the season is just 1.5 shy of the Mizzou single season record of 11.5 set in 2009.

Sam is just the second Tiger to be named a finalist for the Nagurski Trophy, which was first handed out in 1993.  He joins former Mizzou All-American DE Justin Smith, who was previously a finalist as a junior in 2000. 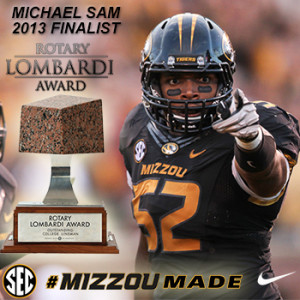 As a finalist, Sam will attend the awards banquet on Dec. 9th in Charlotte, N.C., where the 2013 recipient will be announced.  Other finalists include Darqueze Denard (LB – Michigan State), Aaron Donald (DT – Pittsburgh), Lamarcus Joyner (DB – Florida State) and C.J. Mosley (LB – Alabama).  For more information on the Nagurski Award and the Charlotte Touchdown Club, please visit www.touchdownclub.com.