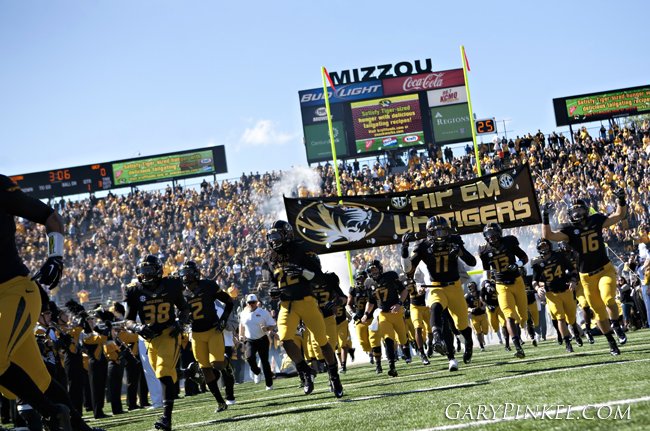 Football (3-0) scored 31 unanswered points on Saturday to erase an early deficit and defeat the Knights of Central Florida 38-10 at The ZOU.

Maty Mauk was impressive once again, tossing four touchdowns. The defense tallied six sacks and four takeaways. Mauk’s touchdown passes against UCF bring him up to nine in the last two games, which ties a school record for most touchdown throws in that span. The only other Mizzou quarterback to achieve this feat is Chase Daniel, who threw for nine scores versus Ole Miss and Colorado in 2007.

The sophomore quarterback now leads the nation with 13 total touchdowns.

Jimmie Hunt was the recipient of a pair of Mauk’s touchdown passes, while Bud Sasser corralled the other two. This season, the two are ranked in the top five in the country with four touchdown grabs apiece. 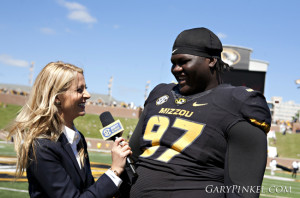 Defensive tackle Josh Augusta chats with an ESPN reporter about his first-half interception.

On defense, Mizzou’s four forced turnovers extend their FBS-leading takeaway streak to 47 games. Defensive tackle Josh Augusta came through at the 3:41 mark, making an athletic leap to snag the ball and keep the streak alive.

The rest of the defensive line wreaked havoc in the UCF backfield all game, totaling 7.0 tackles for loss on the day. Shane Ray led the bunch with 4.0 tackles for loss, including 2.0 sacks. Lucas Vincent brought down the quarterback twice, Markus Golden had 1.5 quarterback takedowns, and Rickey Hatley had a sack of his own.

Ray has the most tackles for loss in the country with 7.5 this season, while Golden is fifth in the nation with 6.5. Mizzou now has 12.0 sacks on the season, the third highest total in the nation. Ray and Golden are also in the top five individually, as Ray’s 5.0 sacks are tied for third in the country, while Golden’s 4.0 are good enough for fifth place.

On Mizzou’s first possession of the game, Mauk scrambled to his left and made a brilliant throw across his body to find Hunt amongst a slew of UCF defenders in the endzone to put the Tigers up 7-0.

After UCF put up 10 points, Mauk got the offense rolling again with an 18-yard completion over the middle to tight end Sean Culkin on third-and-six. Mizzou then marched into the red zone with 43 straight yards on the ground. Mauk capped off the drive with a perfect 10-yard touch pass to Jimmie Hunt to put the Tigers up 14-10.

While both teams were fairly even offensively in the first two quarters, the second half was another story. The Mizzou defense allowed just 134 yards on 40 UCF plays in the second half and limited the quarterback to 12-of-23 passing for 112 yards and two interceptions.

The three times the Knights made it into or near Mizzou territory in the second half, Mizzou forced a turnover. 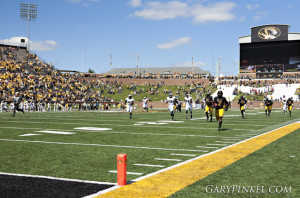 Senior safety Duron Singleton races up the field after a takeaway.

The first was Augusta’s top-ten worthy interception, which was followed by Mauk’s third touchdown less than two minutes later, a 21-yard slant over the middle to Sasser. Mauk connected with Sasser from 22 yards out with 11:32 left in the contest for his fourth and final touchdown.

Mizzou put the icing on the cake in the final seconds of the game when Rickey Hatley stripped Holman and Duron Singleton scooped the ball up and raced 60 yards for the final margin.

With this victory, Mizzou…

Mizzou Football concludes their two-game home stand next Saturday versus Indiana in a 3 p.m. kick on the SEC Network.