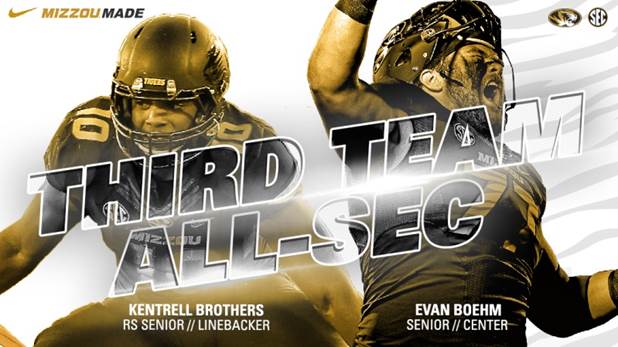 Tiger duo selected as All-SEC honorees by the media

COLUMBIA, Mo. – Mizzou football’s Evan Boehm and Kentrell Brothers were each named Preseason Third Team All-SEC by the media, as announced following SEC Media Days on Friday, July 17. For the second consecutive year, Boehm has been picked as a Preseason All-SEC Third-Team honoree and it is the first career preseason honor for Brothers. The teams were selected by the league’s media during SEC Media Days held at the Hyatt Regency – Wynfrey Hotel this week in Hoover, Alabama.

Brothers, the SEC’s top returning tackler from a season ago, accounted for 122 total tackles in 2015 (62 solo) with 5.0 tackles for loss, four pass break-ups and a team-leading three forced fumbles. He started all 14 games a season ago and was an All-SEC Second Team pick by the Associated Press. Brothers has also been named to three major award watch lists this summer after earning a spot on the Bednarik Award, Nagurski Award and Butkus Award watch lists.

Boehm started all 14 games in 2014, anchoring an offensive line that was a key cog in an 11-3 season and a second consecutive SEC East championship. He has started 40 consecutive games across the Mizzou offensive line, dating back to the 2012 season before shifting to the center spot full time in 2013. Boehm was a First Team Freshman All-American by College Football News at left guard in 2012. He has been named to the Rimington Award and Outland Trophy watch lists this summer as well.

Mizzou football opens the season on Sept. 5 at Memorial Stadium with a 3 p.m. kick against Southeast Missouri. Season tickets are on sale at MUTigers.com and through the Mizzou ticket office at 1-800-CAT-PAWS.