SEC East Champ Tigers to Face Oklahoma State on Jan. 3
COLUMBIA, Mo. – The University of Missouri football team (11-2 overall and Southeastern Conference East Division champions) has accepted an invitation to play in the 2014 AT&T Cotton Bowl Classic, set for Jan. 3rd in Arlington, Texas at the world-renowned AT&T Stadium.  Kickoff for the game, which will pit the Tigers against former conference foe Oklahoma State (10-2, 2nd place in Big 12), is set for 7 p.m. (central time) and will be televised nationally on FOX.
The Cotton Bowl appearance will mark Mizzou’s 11th New Year’s Day (or later) bowl game in program history, and its first since playing in the 2008 Cotton Bowl against Arkansas.  The invitation is a reward for an outstanding season which saw the Tigers post one of the top turnaround years in the nation, going from 5-7 in 2012 to 11-2 – a 6-1/2 game improvement.  This is MU’s 30th all-time bowl appearance. 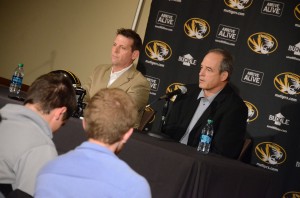 “We are honored and excited to accept a bid to play in the Cotton Bowl,” said Head Coach Gary Pinkel, who will be making his ninth bowl game appearance in 13 seasons at Mizzou.  “We know first-hand just how great of a trip this is, and how first-class of an operation the Cotton Bowl runs.  We have a chance to play an outstanding team in Oklahoma State, and this is an opportunity to finish up a special season in front of a great Mizzou crowd,” Pinkel said.
This will mark the 78th Cotton Bowl Classic, and the Tigers will be making their third appearance in the tradition-rich game.  Mizzou rolled to a 38-7 win over Arkansas in the 2008 game, as TB Tony Temple rushed for a Cotton Bowl-record 281 yards and four touchdowns against the 25th-ranked Razorbacks.  That win closed a stellar season for Mizzou, who finished with a 12-2 record and a school-best final ranking of 4th in the final polls.  Mizzou’s other appearance in the Cotton Bowl was back in 1946, when Texas claimed a 40-27 victory.
“Mizzou is very pleased to be part of the 78th annual Cotton Bowl Classic,” said Director of Athletics Mike Alden.  “The Cotton Bowl is one of the iconic bowl games in all of college football, and it will be a great reward to our team to have the opportunity to play in AT&T Stadium.  We have an outstanding alumni base in the Dallas-Fort Worth area, and I know our fans will be excited to see the Tigers come their way once again,” he said. 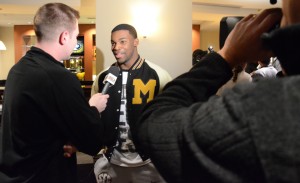 The Mizzou Athletic Ticket Office will begin taking public orders for the 2014 AT&T Cotton Bowl Classic beginning Monday, Dec. 9 at 12 p.m. online at www.mutigers.com. Fans may also order over the phone by calling 1-800-CAT-PAWS (884-PAWS in Columbia), but are strongly encouraged to order on-line to ensure prompt service.  Participating team ticket allotments are 12,500, and tickets are priced at $140 apiece.
Tiger Scholarship Fund members and season ticket holders who have already ordered tickets through pre-sale opportunities will receive information tonight about their orders.  Pre-sale orders must be finalized before Noon Monday (Dec. 9th) before the public sale begins.
The Mizzou Alumni Association and PrimeSport have teamed up to offer the official Mizzou Cotton Bowl travel packages. Fans and alumni interested in the tour options are encouraged to visit the bowl travel website atwww.mizzousportstravel.com. A variety of packages, options, and amenities are available including game tickets while supplies last. Fans may also call 1-800-558-5527 to book or for more information.
For more information about the 2014 AT&T Cotton Bowl Classic, please visit the official site of the Cotton Bowl, at www.attcottonbowl.com.
For more information regarding Mizzou Football, please visit www.mutigers.com, or follow on Twitter at @mutigersdotcom and @mizzoufootball.
QUICK FACTS ABOUT THE AT&T COTTON BOWL CLASSIC
• The Cotton Bowl was founded on January 1, 1937 by J. Curtis Sanford. The game is played in AT&T Stadium in Arlington, Texas, home to the NFL’s Dallas Cowboys.  The stadium has a Field Turf playing surface and has a seating capacity of 71,815.  Last year’s game saw Texas A&M of the SEC defeat Oklahoma of the Big 12 by a 41-13 score…
• Mizzou and Oklahoma State have played 51 times previously, and the Tigers hold a slim 28-23 edge in the overall series, which dates back to 1915.  The Cowboys won the last three games between the old conference rivals (2008, 2009, 2011), with Mizzou’s last win in the series a 38-31 win in Stillwater in 2005.  Mizzou held a 5-4 series edge as part of the Big 12 Conference (1996-2011)…
• MU Head Coach Gary Pinkel is 5-4 in bowl games as a Head Coach, including 4-4 at Mizzou. The Tigers’ last bowl appearance was a solid 41-24 win over North Carolina in the 2011 Independence Bowl that saw current Tiger seniors James Franklin and Andrew Wilson win game offensive and defensive MVP honors, respectively…
• The bowl game will be the 21st of Pinkel’s coaching career, including his assistant coaching days with Don James at Washington. Pinkel’s teams have won 13-of-20 bowl games, including going 8-3 at Washington, 1-0 at Toledo, and 4-4 at Mizzou…
December 9, 2013
https://www.gpmade.org/wp-content/uploads/2022/04/newlogocolorcropped.png 0 0 psasser https://www.gpmade.org/wp-content/uploads/2022/04/newlogocolorcropped.png psasser2013-12-09 08:34:082013-12-09 08:34:08Mizzou Accepts Invite to 2014 AT&T Cotton Bowl Classic
Governor Nixon Thanks Mizzou Football For Respect Team Has Brought MissouriNelly Talks Mizzou Football
Scroll to top