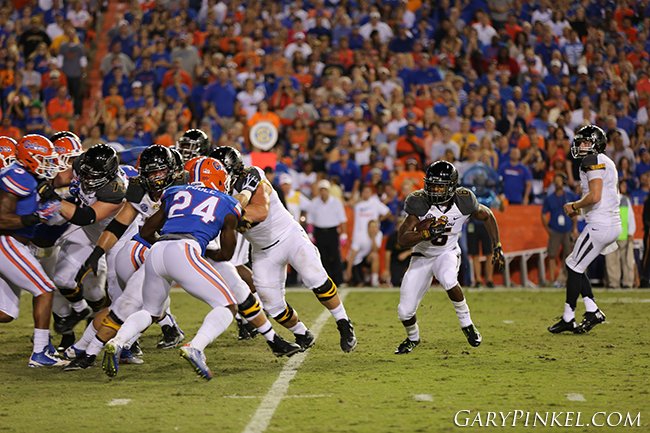 Mizzou got off to a quick start as Marcus Murphy, who scored three touchdowns in the game, returned the opening kickoff 96 yards to the house for his sixth career return score, breaking the school record he shared with Jeremy Maclin.

When Murphy wasn’t returning kicks, the defense was stifling, forcing turnovers on two of Florida’s first three possessions. Lucas Vincent recovered a fumble on the Gator’s sixth play from scrimmage. On third-and-10 two drives later, Kentrell Brothers came on a blitz to pop the ball loose from Gator quarterback Treon Harris. Michael Scherer fell on the ball at the Gator 19, and four plays later, Murphy found the end zone from five yards out. The 5 foot 9 speedster worked his magic again early in the second half when he turned a 41-yard punt into an 82-yard score, becoming the first Tiger since 1976 to score three different ways in a game.

Braylon Webb corralled his first of two interceptions midway through the second quarter to set up a 34-yard Andrew Baggett field goal, and Mizzou Football took a 20-0 lead into the halftime locker room. To go along with their three takeaways, the Mizzou defense held Florida to just 66 yards on 31 first-half plays.

Mizzou Football continued to get after it in the third quarter, scoring two defensive touchdowns. Shane Ray got the party started by forcing the ball loose on a sack, and Markus Golden picked it up and ran it into the end zone for a 21-yard scoop and score. Three plays later, Darvin Ruise intercepted a sideline pass and took it the other way for a 46-yard pick-six.

Webb snagged his second interception on Florida’s first possession of the fourth quarter for Mizzou Football’s sixth and final takeaway.

One big reason for Mizzou Football’s preeminence in the turnover department was the defense’s ferocious pass rush. The Tiger defensive front combined for six sacks, including two from Ray, the SEC’s leader in the category. Duron Singleton, Harold Brantley and Kentrell Brothers had one apiece, and Marcus Loud and Matt Hoch each contributed half a sack.

Along with his two sacks and forced fumble, Ray also blocked an extra point at the end of the game. His 10 sacks on the season are the third highest total in the nation, and the most ever by a Mizzou Tiger through six games.

Mizzou Football returns home for the university’s 103rd Homecoming celebration versus Vanderbilt next Saturday, October 25 at 3 p.m. The game that will be televised on the SEC Network. It will also be the Tigers’ first-ever “Tiger Stripe” game.