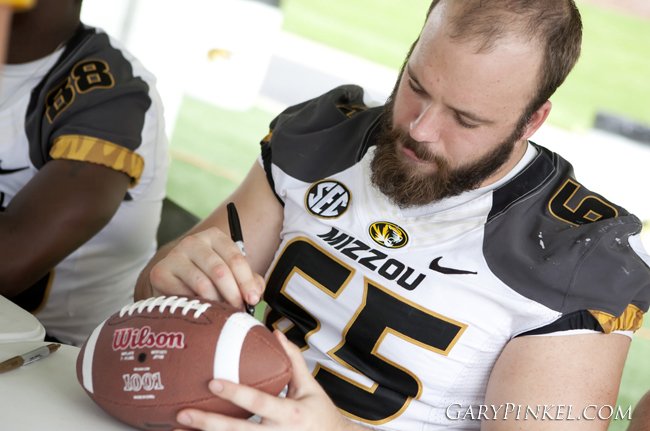 Senior offensive lineman Mitch Morse is much more than just a productive football player on the field. Thanks to his exceptional performance in the classroom and volunteer work in the community, Morse is a candidate for the NCAA 2014 Senior CLASS Award.

The Austin, Texas, native earned his bachelor’s degree in hospitality management here at Mizzou last May on the strength of a 3.61 grade point average. This year he is a graduate student in the university’s distinguished Positive Coaching program.

Morse’s volunteering resumé is broad and impressive, including the likes of the Children’s Hospital here in Columbia; the Food Bank of Central and Northeast Missouri; and Mizzou’s Men4Men program, which works to develop young men in regards to how to conduct themselves in social and personal situations.

Morse’s accomplishments on the football field cannot be overlooked either. The Mizzou co-captain was named Most Improved Offensive Lineman in 2012 and has made 28 starts in the last three years. He started all 14 games in 2013 at right tackle before moving over to fill the vacancy at left tackle left by now-Seattle Seahawk offensive lineman Justin Britt.

A Division I senior’s eligibility for the award is based on a player’s proficiency in four critical areas the NCAA holds in high esteem: the community, classroom, character, and competition.

The NCAA will narrow its 30 candidates to a final list of 10 midway through the season, and those making the cut will be placed on the official ballot. Media, coaches, and fans across the nation will be able to vote for the player they feel is most deserving of the award. A winner will be declared during bowl season early next year.

Look for Morse at left tackle in Mizzou’s upcoming matchup with Indiana on September 20. Kickoff is set for 3 p.m. and will air on the SEC Network.