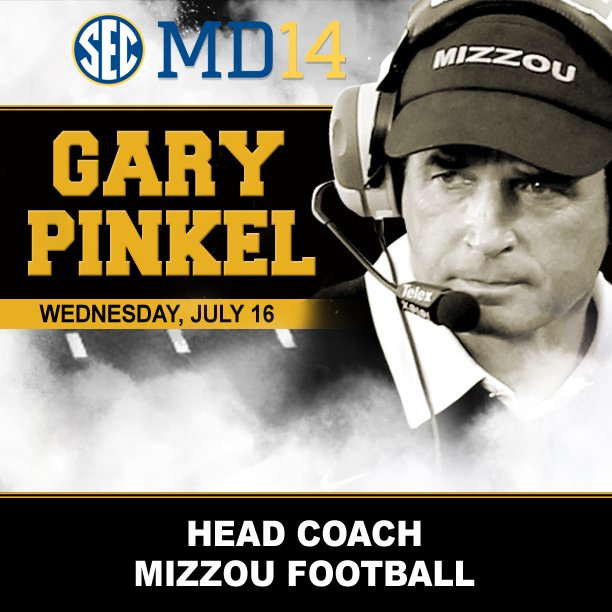 The four-day event kicks off Monday, July 14, with an appearance by SEC Commissioner Mike Slive. On Wednesday the media will get a chance to talk to Mauk, Boehm, Golden and Pinkel, as well as SEC Coordinator of Football Officials Steve Shaw and Justin Connolly of the SEC Network.

This will be Mauk’s first full season at the helm of Mizzou’s offense, as he filled in admirably for an injury-plagued James Franklin during the team’s 12-2 run last season. Mauk completed 68 passes for just over 1,000 yards and threw for 11 scores against 2 interceptions.

Boehm has started 26 consecutive games for Mizzou, making the first-team Freshman All-American team in 2012, and anchoring a run game that ranked second in the SEC and 16th in the nation in 2013. He was named to the Rimington Award watch list this season, which is awarded each year to the best center in college football.

Golden will lead Mizzou’s defensive front into battle this season, looking to build off of a 2013 campaign that included 36 tackles (13 for a loss) and 6.5 sacks. His biggest highlight on the season was a 70-yard interception and return to the house against Toledo.

Mizzou Football will open the season against South Dakota State in a few short weeks, and fans and media outlets are eager to hear from the coaches and players who will be key contributors for Mizzou this season. Follow Gary Pinkel on Twitter and check the blog for updates throughout SEC Media Day. Full coverage of SEC Media Day is available via ESPN.

Mizzou and Purdue Agree to Two-Game Series
Scroll to top