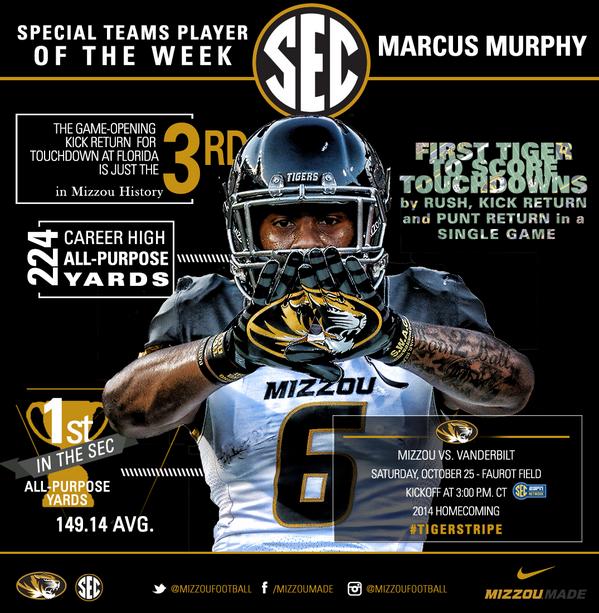 Murphy has been named the SEC Special Teams Player of the Week following Mizzou Football’s 42-13 win over the Florida Gators on Saturday.

Murphy had an opening 96-yard run back to put Mizzou ahead for good just 11 seconds into the game, a 5-yard scamper for the team’s next score near the end of the first quarter, and an 82 yard punt return to put Mizzou up 28-0 just minutes into the third quarter. He recorded three touchdowns on 18 touches between his tail back and kick return duties.

The return touchdowns were the sixth and seventh of his career, breaking his tie with former Tiger Jeremy Maclin, an NFL first-round pick and current Philadelphia Eagle.

Murphy also became the first Mizzou Football player record a punt return, kick return, and rushing touchdown all in the same game. Murphy is now at a career-high of 224 all-purpose yards, and he leads the SEC with 149.1 per game, making him 15th best in the nation.

Murphy has an average of 4.7 yards per carry on the season,and also has 109 yards receiving.

Watch Murphy and the rest of the Mizzou Football family take on Vanderbilt this Saturday, October 25 at 3 p.m. in The ZOU.