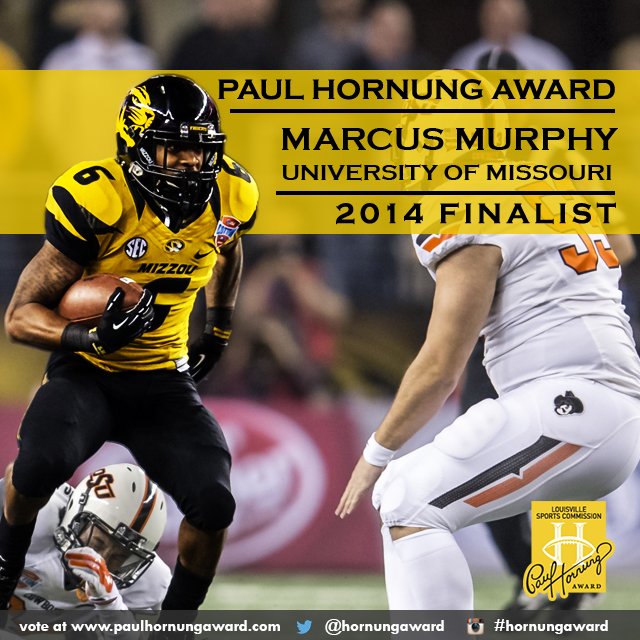 The Hornung Award, created in 2010, is designed to honor the most versatile player in all of college football. The award is also designed to preserve the legacy of Paul Hornung, one of Kentucky’s most accomplished athletes and winner of the 1956 Heisman Trophy.

Murphy’s nomination is proof that he is one of the most dynamic scoring threats in all of college football. He is the only player in the Football Bowl Subdivision (FBS) to score a touchdown during the 2014 football season in the four all-purpose categories, recording two kickoff return scores, one rushing score, one receiving score, and one punt return score. Murphy is one of four FBS players to have a score this season via kickoff and punt return. He holds Mizzou career records for most combined kick return touchdowns, punt return touchdowns, and punt return yardage.

Murphy is also the NCAA’s leader in all-purpose yardage, entering Saturday’s game against the Tennessee Volunteers with 4,577 yards.

The Hornung Award winner will be announced in December, followed by the annual Paul Hornung Award Banquet on January 27, 2015, in Louisville, Kentucky.

A 16-member committee will choose the most versatile player in major college football, but fans have the opportunity to contribute to the final 17th vote. Tiger fans can visit www.paulhornungaward.com to cast their vote for the best all-purpose football star.

Watch Murphy and the Tigers take on the Tennessee Volunteers at 6:30 p.m. CT on November 22 on ESPN. Mizzou Football will post live updates on Twitter, Instagram, and Facebook throughout the game, and fans can also listen in via Tiger Network radio affiliates.