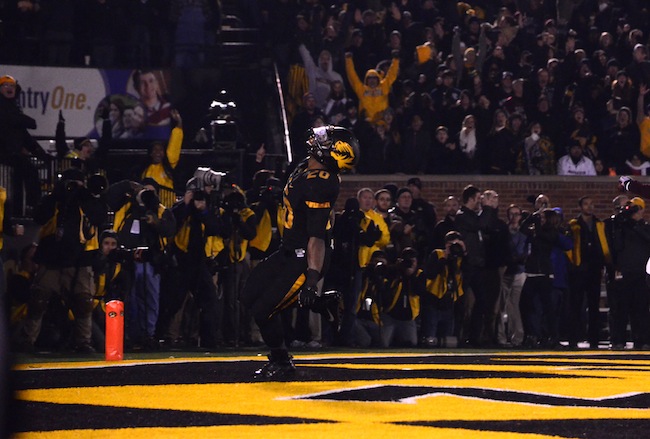 Henry Josey scores a touchdown during his final game in The ZOU.

COLUMBIA, Mo. – University of Missouri junior tailback Henry Josey (Angleton, Texas) has decided to bypass his final year of eligibility and make himself available for the 2014 NFL Draft.  Josey, fresh off being named the offensive player of the game in Mizzou’s 41-31 win over Oklahoma State in Friday’s 2014 AT&T Cotton Bowl Classic, joins fellow junior teammate Kony Ealy, a defensive end from New Madrid, Mo., who announced following the game that he would be declaring for the draft.

Josey starred for the Tigers in their dramatic Cotton Bowl win, as he ran for three touchdowns, including the game-winning score from 16 yards out with 3:08 left in the contest.  He also scored from 25 yards out earlier in the quarter to break a 17-17 tie, after he opened the scoring in the first quarter with a 3-yard run that staked Mizzou to a 7-0 lead.  Josey finished the game with 92 yards rushing, and also caught a pass for 10 yards.  He ended his junior season with 1,166 yards rushing and ranked second in the Southeastern Conference with 16 touchdowns.

He is only the second Mizzou running back to post two 1,000-yard seasons, as he ran for 1,168 yards and nine touchdowns as a sophomore in 2011 before sustaining a season-ending knee injury in game #10 against Texas.  That injury kept him out all of the 2012 season.

“This is really a bittersweet decision to make,” said Josey.  “I’m so grateful to Mizzou and my coaches and teammates and fans for all of their support and everything they’ve meant to me these past four years.  It’s difficult to think I won’t be with them next year.  But I’m really excited to have a chance to play professionally and work on fulfilling a dream I’ve had since I was a little kid.  I can’t possibly express how much I owe to so many people for helping me get to this position, my doctors, trainers, strength coaches, everyone who pushed me and helped me and believed in me, and of course my coaches for trusting me.  To the Mizzou fans, thanks so much for all of your prayers and thoughts the past couple of years, you truly inspired me to get back on the field.  I’m going to miss my teammates but I know they’ll do great things and I will always be a Mizzou Tiger.”

Head Coach Gary Pinkel said that while his program would miss Josey, he supports his decision.

“Henry Josey is a first-class person any way you cut it, and anytime you take that out of your program, it leaves a void,” said Pinkel.  “He is such an amazing competitor, and I’ve said time and again just how inspiring he has been for our team the last two years.  We were so proud of him for overcoming everything he had to deal with, and to be such a positive influence on and off the field.  We’re going to miss him, no question, but Henry wants to pursue his dream of playing professionally and we wish him nothing but the best and we’ll do everything we can to help him reach that goal.  The Mizzou Football program is in better shape because of his efforts, so we’re grateful for the time he spent with us, and we know he’ll represent Mizzou well going forward,” he said.

The 2014 NFL Draft is May 8-10. Make sure to follow @MizzouFootball the next few months for updates on #MizzouMade Tigers in the NFL.