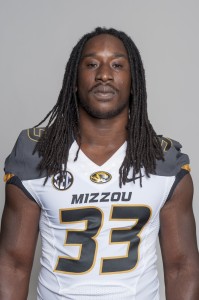 BIRMINGHAM, Ala. – Mizzou Football junior defensive lineman Markus Golden (St. Louis, Mo.) has been named the Southeastern Conference’s Defensive Lineman of the Week, the league office announced on Monday. Golden made a crucial play in Mizzou’s 38- 23 win over Toledo on Saturday, intercepting a Rocket pass and returning it 70 yards for a touchdown.

Golden’s big pick-six started Mizzou’s scoring in the second half, putting the Tigers up 24-9 with 11:40 left in the third quarter. A strong upfield rush and pressure from Golden put him in position to make the snag when Toledo quarterback Terrance Owens lost control of the football while attempting a pass.

Golden snatched the ball out of the air while he pushed Owens out of the way, allowing him open space to race 70 yards the other way for the score.