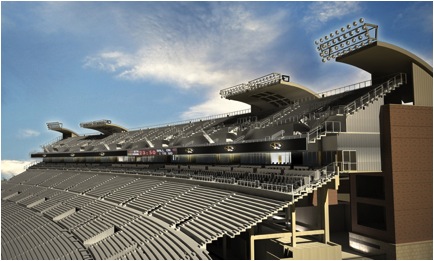 Welcome to The Zou Last year, the University of Missouri football team donned their new black and gold uniforms for their SEC debut. This season, the Tigers will be showing off a much bigger style change. After 87 years of season-long grinds, the football stadium originally known as “Memorial Stadium” will be called by a new name. On top of this, the stadium’s appearance will also take on a new identity. The University plans to call the newly renovated stadium “The Zou,” and the stadium’s additions will be made to the East and West Sides of the facility. The total project cost for the Tigers will amount to $45.5 million, and its expected completion date is August 30, 2014. Although the finished project is a year away from its completion, the wait will be well worth it, as the changes to the stadium will offer an even more enjoyable experience for the fans than ever before. Let’s take a closer look at some of the upcoming and exciting changes you can expect for your Missouri Tigers’ polished home field. East Side Renovations The Zou’s East Side will see changes in its seating arrangements and numbers. There will now be 1,200 premium seats, 800 coming from the 800 Club and 400 coming from the 400 Loge. In addition to premium seats, there will be 4,100+ seats total in the Upper Deck as well. 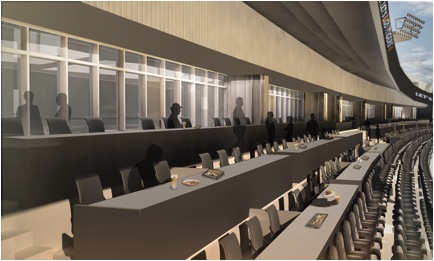 There will also be the addition of a Premium Club indoor space. This space will be 23,000+ square ft., which is three times the size of the West Side Club. Lastly, there will be an addition that all spectators can enjoy, as the Spectator Amenities will have an expanded concourse, enhanced and expanded restroom and concession areas, new ticket office location, more points of entry, and, of course, new field lighting. West Side Renovations Like the East Side, the West Side will also have some impressive modifications. The first being the football suites. Here are some of the features fans will have access to with them: – Ticketed seats and four standing room tickets per game – Four complimentary parking passes – View of the new video board – Tall table/island and four complimentary barstools – Refrigerator, sink, and locked storage cabinets – Complimentary pre-game buffet served on the third and fourth floors – Food and beverage are available through Levy Catering for the 2013-14 season The LeMone Tiger Lounge will also be a big attraction on the West Side. It is located on the third floor of the Memorial Stadium and offers 456 seats that give the spectator an outstanding view of the field. In addition to the view, attendees will also have access to the complimentary buffet before kickoff at every game.

Lastly, there will be the West Side Premium Loge Boxes. The West Side Loge boxes, not to be mistaken with the East Side 400 Loges, will have 60 of the most top-notch loge seats available in the SEC. New Look, Same Mizzou Despite the big title and building changes, the very same fans, players, and beloved Faurot Field will remain inside the stadium’s embrace, just as before. With these new additions, it is the University of Missouri’s hopes that its great fans will be able to enjoy traditional, riveting Tigers football in both a luxurious and spirited way.