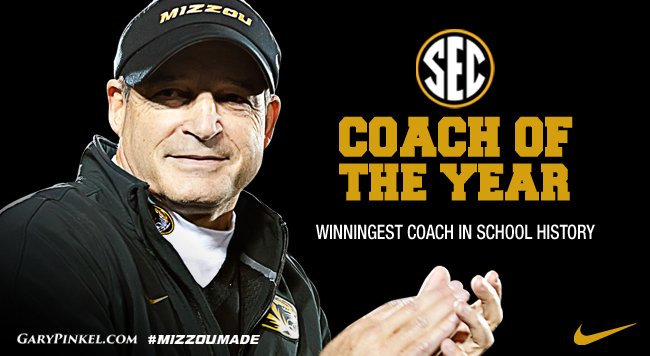 Mizzou Football Head Coach Gary Pinkel has been named the 2014 SEC Coach of the Year, which was voted on by league coaches.

This is not the first time Pinkel has won conference coach of the year honors at Mizzou. He took the title in the 2007 Big 12 Conference after leading the Tigers to a 12-2 record and a no. 1 national ranking late in the season.

This is the fifth time a Mizzou Football coach has won the conference coach of the year honor. However, Pinkel is the first coach to win the award twice. Al Onofrio won in 1972, Warren Powers won in 1983, and Larry Smith won in 1997.

This season, Pinkel led Mizzou Football to a 10-3 regular season and the SEC Eastern Division title for the second year in a row, thanks to a 7-1 SEC league record. Under Pinkel’s leadership, Mizzou has now won conference division titles in five of the last eight seasons (2007, 2008, 2010, 2013, and 2014,) which is tied with Alabama and Florida State for most in the nation during that stretch. Additionally, the Tigers’ 75 wins from 2007-2014 is the 5th-most among FBS power five conferences.

Mizzou Football is off from practice until this Saturday, when they will begin on-field preparations for the 2015 Buffalo Wild Wings Citrus Bowl against Minnesota, set for January 1 in Orlando, Florida at 12 p.m. CT. The game will be televised by ESPN on ABC.