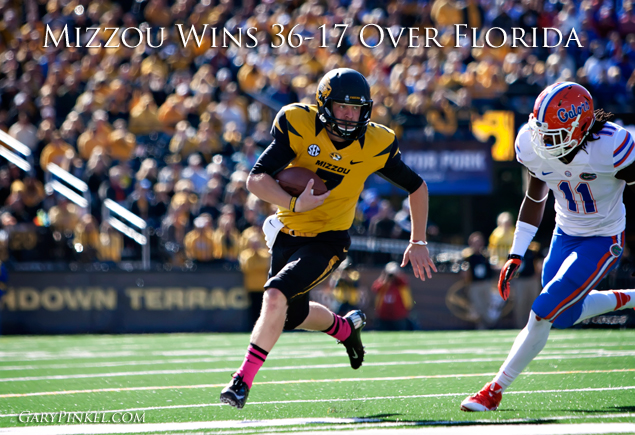 Redshirt freshman quarterback Maty Mauk threw for 295 yards and accounted for two touchdowns, one through the air and one on the ground, in his first career start to lead Mizzou to a 36-17 romp of Florida.

Mauk, who started in place of the injured James Franklin, looked poised and comfortable from the get-go. On the Tigers’ very first snap, he connected with L’Damian Washington for 41 yards on a perfectly thrown pass between two Gator defenders. Mauk then threw a 20-yard touchdown to Bud Sasser on the very next play.

Mizzou went to the air on its first eight plays. According to offensive coordinator Josh Henson, Mauk came out firing to send the message that the offense wouldn’t be grounded with Franklin on the sideline.

When it was all said and done, the Tigers stayed true to their balanced attack, running the ball 37 times and passing it 36.

Henry Josey’s number was called on 18 of those runs, and he answered with 136 yards and a touchdown. The 18 touches were the most for a Mizzou running back this season, and was due in large part to Marcus Murphy’s exit from the game in the second quarter with a head injury. Russell Hansbrough also rushed for 47 yards on 12 carries.

After Mizzou’s lightning quick two play scoring drive to open the game, the defense stymied three straight Florida runs to force a punt. The punt was mishandled by the usually sure-handed Murphy though, and the Gators recovered the ball at the Mizzou 24.

Unfazed, The Tiger defense came up big once again in the red zone. After allowing 17-yard gain on first down, Florida only gained a yard on its next three plays and had to settle for a 23-yard field goal.

Mizzou forced another three-and-out on the Gators’ next possession, and then another freshman made an impact play for the Tigers. Aarion Penton, a true freshman starting in place of the injured E.J. Gaines, intercepted Florida’s quarterback at the Gators’ 49-yard line. The pick set up Andrew Baggett’s first field goal, which he nailed from 43-yards out to give Mizzou a 10-3 lead.

More stifling defense gave the Tigers the ball back at their own 31-yard line. Mauk and Josey took over and marched Mizzou all the way down to the one. Baggett put three more points on the board to put Mizzou up by 10.

On the day, the kicker was a perfect 5-5, tying a school record for field goals made in a game. With PATs included, Baggett outscored the entire Florida team all by himself.

But just like on Mizzou’s first drive of the game, Mauk came out firing and had an answer in the second half. On the Tigers’ second play of the half, Mauk hit Jimmie Hunt for 52 yards to the Florida 11. Two plays later, Josey ran it in from 6 yards out, and Mizzou was back to a 10-point lead.

Baggett’s third field goal made it 23-10 Mizzou with 6:30 left in the third, and then Florida made it a one-possession game again when running back Kelvin Taylor broke off a 20-yard touchdown run.

That was all the Gators would get though, as the Tiger defense, led by SEC Defensive Player of the Week Michael Sam, shut them down the rest of the way. Two more Baggett field goals made it 29-17 Mizzou, and Mauk sealed the victory with a 17-yard touchdown scramble with 6:30 remaining in the game.

While Mauk and Josey stole the show on the offensive end, it was the defense that had the most dominating performance of the afternoon.

Mizzou held Florida to just 92 yards passing and 59 yards rushing, its lowest offensive output of the season. The surging defensive line was a big reason why, as they were in the backfield on virtually every play and made the Gator quarterback uncomfortable almost every time he dropped back. The Tigers recorded a season-high six sacks on the day, with  three coming at the hands of Sam. Kony Ealy, Matt Hoch and Shane Ray recorded the other three.

Mizzou will look to remain unbeaten this week when they host South Carolina in Mizzou’s 102nd homecoming game. Kick-off at The ZOU is set for 6 p.m. Arrive Early, Wear Gold, Be Loud, and Stay Late MIZ!