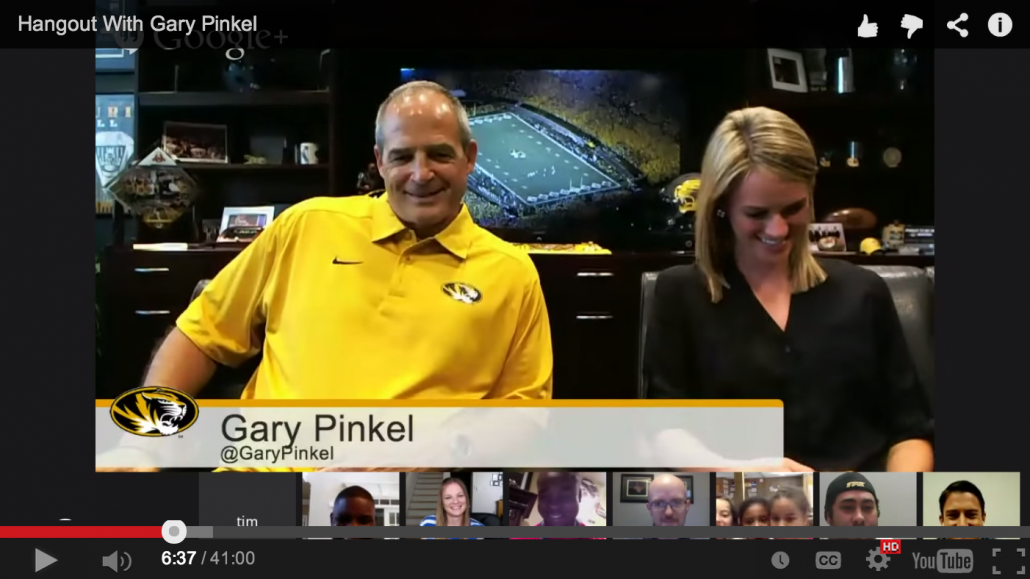 For Mizzou fans, staying connected with Missouri Football has never been easier. Fans can choose from multiple Twitter handles, Facebook fan pages, and Instagram accounts for updates on the Mizzou Football Family.

And if those weren’t enough, Head Coach Gary Pinkel has found a new way to interact with Mizzou fans one-on-one: Google Plus Hangouts.

“There are so many different avenues with social networking,” Pinkel said. “It’s nice to be able to communicate our message, our way.”

Coach Pinkel has been “hanging out” with Tiger fans regularly on Google Plus Hangouts for almost a year in a relaxed office setting. The Mizzou Tiger fan base gets a rare opportunity to talk with Coach Pinkel in a relaxed setting off The ZOU turf.

“Fans can ask me anything they want to ask, and I think it is a responsibility that I have to be transparent,” Pinkel said. “They can feel comfortable to have a Google Hangout with me.”

Head Coach Gary Pinkel has had nothing but positive feedback through the Hangout process, and it allows him to interact with the fans that support his mission through thick and thin.

For those of you who have not had the chance to Hangout with Coach Pinkel, it is not too late. Coach Pinkel is hosting another Google Hangout at 2:30 p.m. Wednesday, September 3, three days after Mizzou Football opens the season against South Dakota State.

Sign up to join the next Google Hangout with Coach Pinkel, and be prepared with your questions!