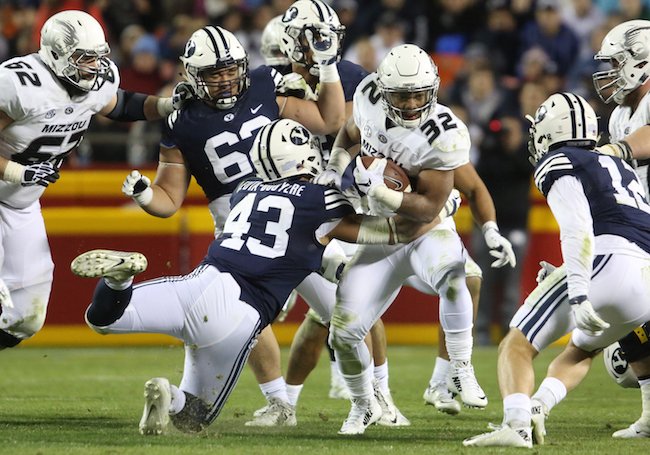 KANSAS CITY, Mo. – Drew Lock threw for a career-high 244 yards and a touchdown, and Tyler Hunt added another on the ground as Mizzou notched a 20-16 win over BYU on Saturday night at Arrowhead Stadium.

The day after Head Coach Gary Pinkel announced his resignation at the end of the year, he picked up his 118th win as the head of the Tigers’ program. It also moved Pinkel’s record to 6-1 in Kansas City, where 19 current Tigers call the area home.

Mizzou (5-5) rolled to a season-high 434 yards of offense, backed by a number of key plays across the board. The Tigers scored two critical fourth-quarter touchdowns – one each through the air and the ground – to take a 20-10 lead. It started with J’Mon Moore‘s four-yard fade-route catch from Lock to cap a 13-play drive that rolled 8:09 off the clock.

On the next play from scrimmage, Marcell Frazier sacked and stripped BYU’s Tanner Mangum. Michael Scherer recovered at the Cougar 16 to set up Lock & Co. in excellent position. Six plays later, Tyler Hunt bowled in from a yard out to give the Tigers multiple touchdowns for the first time since the South Carolina game.

The Tiger defense didn’t allow BYU a first down until the final play of the first quarter. By that point, the Tiger offense had amassed 128 yards and seven first downs of their own in securing a 3-0 lead.

Kentrell Brothers continued his stellar season, notching another 11 tackles to add to his nation-leading total.

Mizzou returns to The Zou next Saturday for its final home game of the season vs. Tennessee. Tickets remain available for the 6:15 p.m. kickoff. For all the latest on Mizzou Football, follow the team on Twitter and Instagram, and like us on Facebook.

Watch #MizzouMade Tigers in the NFL: Week 10
Scroll to top