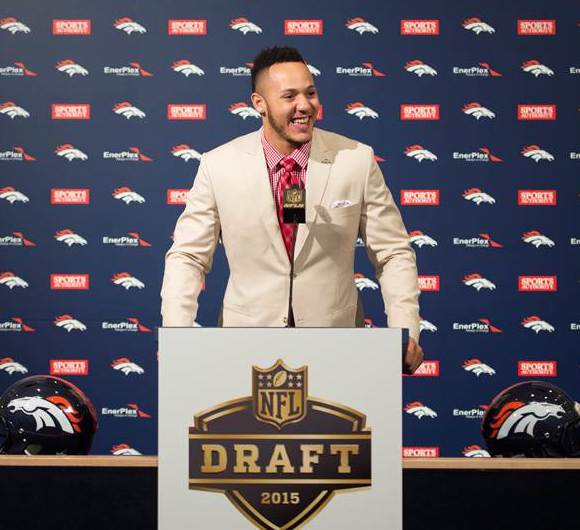 The 2015 NFL Draft was successful for Mizzou Made football players. The program continued its tradition of producing first round talent, as the Broncos’ selection of Mizzou Defensive Lineman Shane Ray was the program’s seventh first round draft pick in the past seven years. The Mizzou Football program ranks in the Top 5 nationally in first round draft picks since 2009. Additionally, Mizzou had the 2nd most players drafted in the first two rounds nationally in 2015.

Mizzou junior defensive end and reigning SEC Defensive Player of the Year Shane Ray (Kansas City, Mo.) was selected with the No. 23 overall pick in the first round of the 2015 NFL Draft by the Denver Broncos on Thursday, April 30, 2015.

Ray becomes the seventh Mizzou standout since 2009 to be drafted in the first round of the NFL Draft, joining DL Sheldon Richardson (No. 13 to the New York Jets in 2013), DL Aldon Smith (No. 7 to San Francisco in 2011), QB Blaine Gabbert (No. 10 to Jacksonville in 2011), LB Sean Weatherspoon (No. 19 to Atlanta in 2010), WR Jeremy Maclin (No. 19 to Philadelphia in 2009) and DT Ziggy Hood (No. 32 to Pittsburgh in 2009). Ray continues the trend of defensive lineman taking their careers in the NFL, becoming the sixth defensive lineman under Craig Kuligowski to be drafted since 2009. Ray is the 19th Tiger in history to be taken in the NFL Draft’s first round.

Morse was voted by the SEC coaches as an All-SEC Second Team honoree. The Texas native started all 14 games and started his final 38 games as a Tiger at right tackle, protecting the blindside of QB Maty Mauk. He was a cornerstone of an offensive line that helped Mizzou rack up an average of 367.0 yards per game, including 177.9 yards per game on the ground. Morse helped guide Mizzou to a 24-5 record and back-to-back SEC East Championships in his last two seasons, serving as a captain in 2014.

Golden evolved into a fan favorite with his high motor over the past two seasons. Golden earned All-SEC Second Team honors at defensive end from the league’s coaches and was an Associated Press All-SEC honorable mention selection as well. The St. Louis, Mo., native was Walter Camp National Defensive Player of the Week following his performance at Tennessee (Nov. 22) and was SEC Defensive Player of the Week as well. He finished 2014 third on the team with his 78 tackles, 20 of which went for a loss to go along with 10.0 sacks and a team-high 12 quarterback hurries. He also forced three fumbles and recovered three more. Golden ranked ninth nationally in tackles for loss and is 20th nationally in sacks, ranking in the top-six in the SEC in both categories. He was a monster in the Buffalo Wild Wings Citrus Bowl, earning MVP honors with a game-high 10 tackles, 4.0 tackles for loss, a forced fumble and 1.5 sacks.  He also added three QB hurries in the 33-17 win over Minnesota.

Two more standouts from the 2014 Mizzou Tiger football team had their names called on Saturday, May 2, 2015, giving Mizzou five picks in all – its most since six Tigers were taken in 2009.

Adding their names to the annals of Mizzou NFL Draft history were WR Bud Sasser (Denton, Texas) and TB/KR Marcus Murphy (DeSoto, Texas). Sasser was taken with the 25th pick of the sixth round (pick #201 overall) by the in-state St. Louis Rams, while Murphy was snagged with the 13th pick of round seven (#230 overall) by the New Orleans Saints.

Sasser won 1st-Team All-SEC honors in 2014 after a breakout season as he became a 1,000-yard receiver for the 11-3 SEC Eastern Division and Citrus Bowl champion Tigers. Sasser led Mizzou in all receiving categories as he caught 77 passes for 1,003 yards and 12 touchdowns. He is the first wide receiver to be drafted from Mizzou since Jeremy Maclin in 2009 (Eagles, 1st round, #19 overall). He is the third Tiger to be taken by the Rams in the last two drafts, joining CB E.J. Gaines (6th round, #188 overall) and DE Michael Sam (7th round, #249 overall).

Murphy won 1st-Team All-American honors for a stellar senior season where he did it all for Mizzou, gaining 1,921 all-purpose yards, including 924 rushing yards, 504 kickoff return yards, 281 punt return yards and 212 receiving yards. Murphy scored touchdowns four different ways in 2014, including four rushing TDs, two kickoff return TDs, one receiving TD and one punt return score. Murphy closed out his Tiger career in style, rushing for a career-best 157 yards in helping lead Mizzou to a 33-17 Citrus Bowl win over Minnesota. He’s the first Tiger to be drafted by the Saints since 1982 (Brad Edelman, 2nd round, #30 overall).