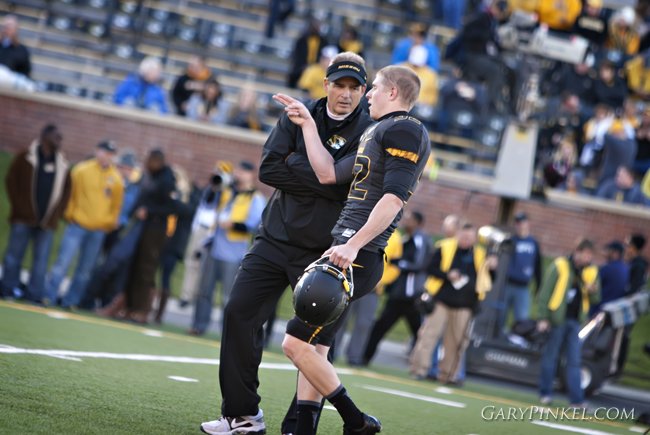 Ever wonder what the Mizzou kickers and punters do in practice?

So does the rest of the Mizzou football team.

Linebacker Mike Sherer didn’t even know that the specialists came to practice.

“I thought they watched film inside or something,” Sherer said. “I see them at the beginning when they kick and punt, but I thought they go back inside after that.”

Safety Ian Simon even wishes he was a kicker sometimes so that he wouldn’t have to go through the grueling drills in practice.

Quarterback Trent Hosick also acknowledges the “good life” that the kickers have, but he appreciates the hard work they put in helping everyone else get better.

”Because the kickers don’t do anything, they help us out with our drills,” Hosick said. “When we’re in the beginning of individual period, there’s no space for them to be kicking, so they catch passes for us.”

Kicker Andrew Baggett isn’t refuting the shots that his teammates are taking. And he’s not complaining either. While the rest of the team is going all out and getting yelled at by coaches, the kickers and punters are enjoying leisurely “punting games.”

The specialists engage in multiple punting games, but in this one, the object is to simply punt it as high into the stands as possible. The lowest punt loses, and the player with the lowest total punts after a couple of rounds has to retrieve the balls.

And then when they get bored of their games, they just walk around practice and play catch.

Regardless of all the smack that the Tigers talk about their kickers and punters, and how much they doubt their physical exertion during practice, the one thing they don’t doubt is their ability to perform under pressure. And for that, they are very much appreciative.

“There’s not a player on the field that’s under more pressure, more scrutiny than a kicker,” Hosick said. “You’ve got to have a guy who’s ice cold back there, and we’re confident with the guys we’ve got.”

Since Gary Pinkel took over in 2001, Mizzou has had some phenomenal kickers, most notably, Jeff Wolfert, Grant Ressel and the current Tiger kicker, Andrew Baggett.

All three joined the program as walk-ons, and all three developed into cold-blooded marksmen.

Ressel took over in 2009, and didn’t miss a beat. He made 26-of-27 field goals and 39-of-30 PATs, setting a new single-season record for the NCAA best combined kick accuracy (98.5%). He also led the NCAA in field goal percentage and earned First Team All-American honors. In 2010, Ressel hit 17 field goals, 45 extra points, and was a Lou Groza Award Semifinalist, as he also was in 2009.

Baggett took the helm in 2012 following Ressel’s graduation, and picked up right where the former All-American left off. In his first year as a starter, Baggett nailed 14 field goals, 33 PATs, and was named to the SEC All-Freshman team. In 2013 he was even better, hitting 18 field goals and 66 PATs, and was particularly impressive from long range, making six of his eight attempts from 40-49 yards. Baggett returns in 2014 as the starter for the third straight season, and will look to improve on an already stellar career.