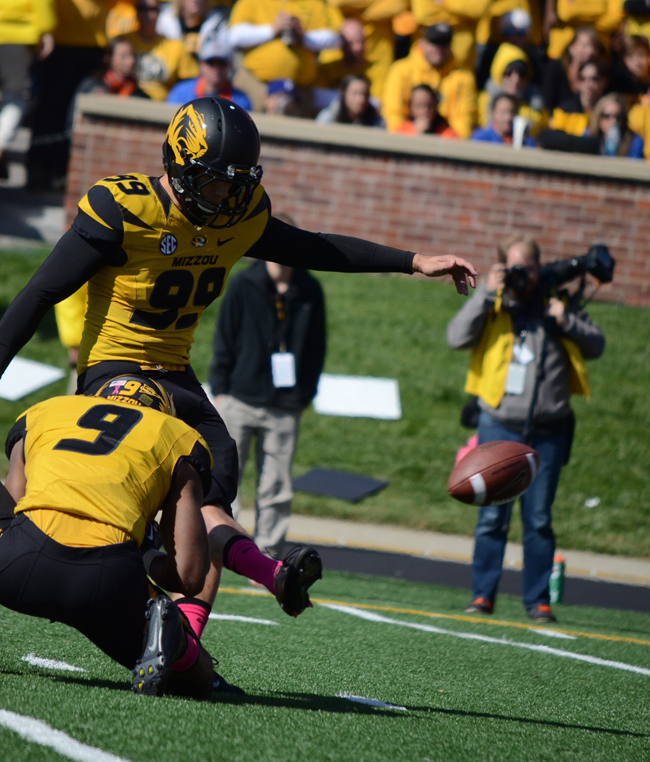 Michael Sam, Henry Josey and Andrew Baggett were outstanding in Mizzou’s 36-17 victory over Florida on Saturday, and as a result, all three earned national recognition for their performance.

College Football Performance Awards, the largest awards organization in D-I College Football, has recognized Baggett as the National Specialist of the Week, while Sam and Josey earned honorable mention selections at their respective positions.

Baggett nailed five field goals, tying a school record set in 1992 against Kansas. The sophomore was perfect on the day, as he hit five field goals from 43, 18, 39, 33 and 28 yards. With PATs included, he outscored the entire Florida team all by himself.

“Those field goals were so important because it slowly took (Florida) out of the game,” Coach Gary Pinkel said. “It went from a one-score game, to a two-score game. Then, it just kept going on and on.”

Josey was a huge reason why Baggett was in field goal range so often. The junior tailback rushed for a season-high 136 yards on 18 carries, including a 6-yard touchdown in the third quarter, less than a minute and a half after Florida had cut the Tiger lead to three.

Sam continued his jaw-dropping year against Florida, and was the leader of the Mizzou defensive line that took down the Gator’s quarterback six times and had him under immense pressure the entire game.

The senior defensive lineman recorded his third 3.0-sack game of the year and was in the Gator backfield virtually all day. Sam’s nine sacks are the most in the SEC and are tied for the highest total in the nation. He now has 13 tackles for a loss on the season, resulting in losses of 67 yards, also tops in the SEC.