Senior offensive lineman Max Copeland and junior defensive end Kony Ealy are two leaders on Mizzou’s football team, and have spent quite a bit of time in Coach Pinkel’s program. These guys get asked about the X’s and O’s all the time, but we wanted to see what they had to say about the man who leads this program.

Listen as Max and Kony describe Coach Pinkel, and share their thoughts on brotherhood, buying in to the We Are Family philosophy, and setting their sights on goals. 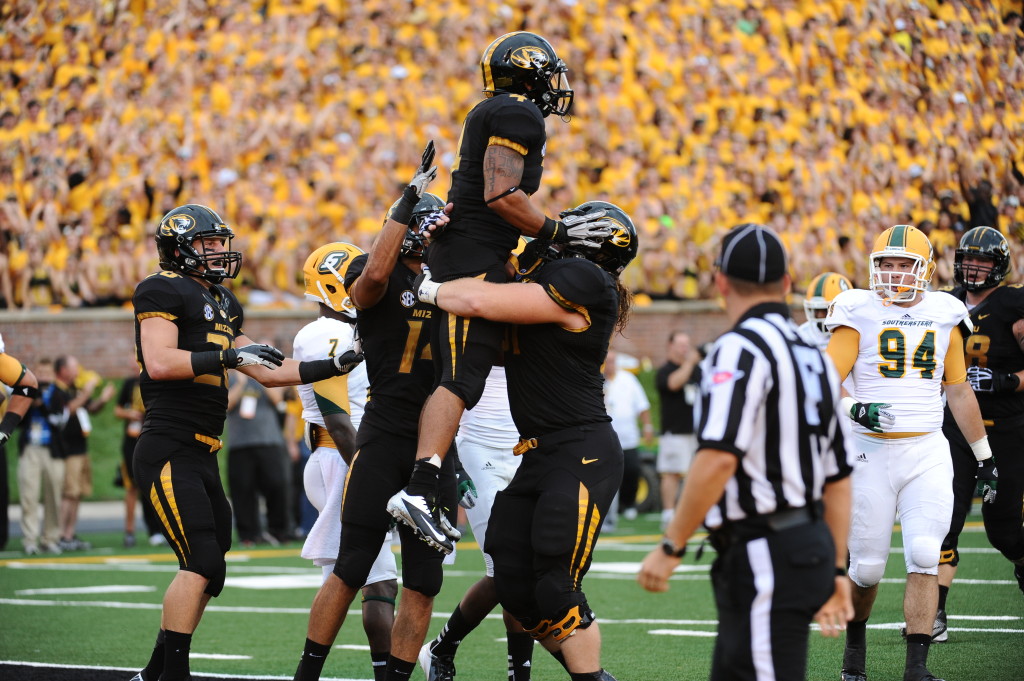 Recently, we’ve touched on how commitment is a key to achieving excellence, and being mentally focused is just as important as being physically able. Now you have to ask yourself, given your current performance level is your commitment strong enough to take you where you want to go? You know yourself better than anyone else in the world! Develop a focusing plan to improve the quality or duration of your focus, and practice this every day.

1. Select a target area for improvement:

3. Review the strategies of others:

4. Write down your plan of action:

To achieve your potential, somewhere deep in your core you have to create the belief that you can do it. By dreaming about your goal and focusing on the process you nourish your commitment, your confidence, and your belief in your ability. Great accomplishments begin with some kind of vision or dream. Every great feat flashes in the mind before it surfaces as reality. Think about your own dreams; nurture them in your mind, often. Go after your dreams; let them lead you. It’s the only chance you have to move along your path of self-fulfillment and excellence.

As this Emmy-nominated commercial by Nike shows, hard work and the commitment to reach a goal are both necessary for success. You don’t have to be born with elite physical gifts. You have to idealize greatness in your mind and commit to it. Greatness can’t be achieved without commitment.

Personal excellence is largely a question of believing in your own capabilities and fully committing yourself to your own development. There are disagreements about the physical requirements necessary for excellence, but almost total agreement on the psychological attributes. Commitment and focus are identified as the most essential keys to excellence. To excel in anything, you must become highly committed and you must also develop the focus required to perform your best under stressful circumstances. At some point you have to say, I want to be really good at this; I want this to work; I am going to do everything I can to be as good as I can be; I am making this a priority in my life. To be your best, you must live this commitment and continue to stretch your limits. Commitment alone doesn’t guarantee success, but a lack of commitment guarantees that you’ll fall short of your potential.

Your commitment is reflected in the intensity you must bring to practice and competition. When you train, you are there for a reason – to do your best and accomplish your goals – and are focused every second out there. In competition, you are energized and on the right channel, and you are determined to perform your best – no matter what. Your personal level of commitment is something you must work out for yourself. No one can tell you how important something is in your life; that is your decision. It is clear that people who excel are extremely committed. There is no way to achieve a high level of excellence without a high level of personal commitment.

The Mizzou Football team has embraced this philosophy, and dedicate our time to committing to activities that will help us reach excellence. Check out our Youtube page to see more videos of our hard work like this.

The need for accountability is obvious in the fourth quarter. The time on the clock melts away at an impossible pace, and the only sound louder than the rabid crowd is the pumping of your heart in your ears. Down by four, you line up under center, staring into the face of a defensive end whose job it is to put you on your back.

Here’s where accountability comes in; you have to trust your line will hold their blocks just long enough for you to get the throw off before your body is put in an uncomfortable sandwich between Mr. Defensive End and the turf. You need to trust that your receiver will make his last cut, turn and catch your pass.

In these moments, the importance of accountability is clearest. However, as a member of a team, a family, you must be accountable around the clock. The word vacation is an alien term, every day you and your team must hold each other accountable.

So how do you do this? The Law of Accountability gives a formula that is easy to understand but hard to achieve. And like anything that’s worth having in life, you have to work for it.

Character is the first step in this equation, but it’s important to remember that every member of the team must embrace all five of these qualities in order to achieve accountability.

Character makes trust possible. Trust makes leadership possible. Accountability begins with character because character is based on trust. Trust is the foundation for all human interaction; it determines who we surround ourselves with. If you can’t trust someone, you won’t count on him or her when it counts.

Competence boils down to getting the job done. While character is the root of this equation, being trustworthy or being a good guy can only get you so far. Think of it like this: if you were having surgery for a life-threatening illness, would you rather have a good surgeon who was a bad person, or a bad surgeon that smiles a lot?

Competence matters, plain and simple. When you put someone in a vacuum and eliminate all other qualities, can they perform? If a person is going to be on the same team as you, you want both competence and character.

Showing commitment outside of the lines, when the clock isn’t running, is the best way to demonstrate to your teammates that when the going gets tough, they can count on you. It’s important to remember that every member of your team must be committed to the same goal. It just takes one person to topple the harmony of a team. Lou Holtz once said, “You can’t win without good athletes, but you can lose with them.” Talent is a terrible thing to waste, and a dedication to commitment is the best way to avoid the path to failure.

Consistency is the synthesis of the previous three qualities. You have character, you’re competent, and you’re committed. Demonstrate those traits every day. Consistency isn’t easy to achieve. Willpower is necessary. You must have the perseverance to put in work every day to create a routine that will allow you to be successful.

By making yourself more successful, you are benefiting your entire team. You ensure that you aren’t the weakest link. You act as a role model for other teammates. You engender a culture of constant work and a commitment to excellence. Do this consistently, and you will see marked improvement in your entire team.

Cohesion seems a little redundant at this point, doesn’t it? If every member of the team embodies the previous four qualities, then your unit is already cohesive. Alas, nobody’s perfect, and if a teammate slips up, the rest of the team has to be there to catch him, brush him off and go back to work.

Through all of the trials and tribulations, the team must stick together. Adversity is not only inevitable, but also necessary. The strongest steel is forged in the hottest fire. After overcoming adversity, the team will have a collective pride that will create a unifying, sinewy bond. Take pride in the fact that the collective group can function at a higher level than any individual could. The unit doesn’t shine because you’re a member; you shine because you’re good enough to be a member.

When a teammate looks at you in crunch time to perform, a feeling of pride swells up knowing that all of your hard work and dedication has paid off. Your teammates believe in you and hold you accountable to perform. Reciprocate that in holding your teammates accountable, and they will feel that same sense of accomplishment.

When you add these five C’s together, you end up with accountability, and by association, success. Finally, it’s important to remember that the Law of Accountability is a workout plan, not a weight-loss pill. Now, get working.