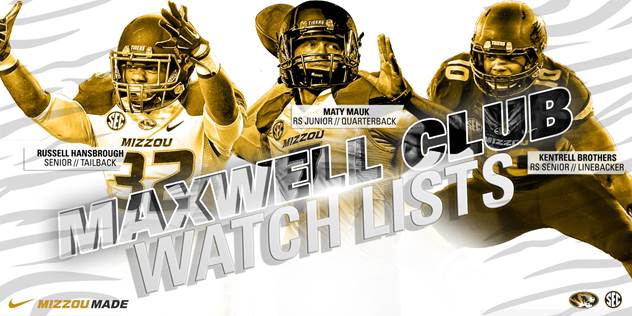 Brothers, the SEC’s top returning tackler from a season ago, is on the Bednarik Watch List for the first time in his career. The Bednarik Award has been presented to the College Defensive Player of the Year since 1995. Brothers accounted for 122 total tackles in 2015 (62 solo, 60 assists) while totaling 5.0 tackles-for-loss, four pass break-ups and a team-leading three forced fumbles. He started all 14 games a season ago and was an All-SEC Second Team pick by the Associated Press.

Hansbrough and Mauk, who combine to give Mizzou the most productive returning backfield in the SEC in 2015, both land on the Maxwell Award Watch List. The Maxwell Award, named in honor of Robert W. “Tiny” Maxwell, has been given to America’s College Player of the Year since 1937.

A veteran tailback who has rushed for nearly 2,000 yards in his Mizzou career, Hansbrough is on the Maxwell Award Watch List for the first time in his career. He led Mizzou with his first 1,000-yard season in 2014, totaling 1,084 yards, a mark that ranked sixth in the SEC despite starting just three games – he was also seventh in the SEC in rush yards per game. He was SEC Offensive Player of the Week and National Tailback of the Week following a 199-yard outburst at Texas A&M, the 10th-best single-game rush total in program history.

Mauk, a dual-threat playmaker, has won 14 of the 18 games he has started at quarterback in his career and gives Mizzou one of the most seasoned signal callers in the nation this season. He started all 14 games a season ago and threw for 2,648 total yards and 25 touchdowns. He also rushed for 373 yards and two more scores. In 2014, he was sixth in the SEC in total offense and closed the season with seven consecutive games with a passer rating of 100.0 or better. He is sixth in program history with his 36 career TD tosses.