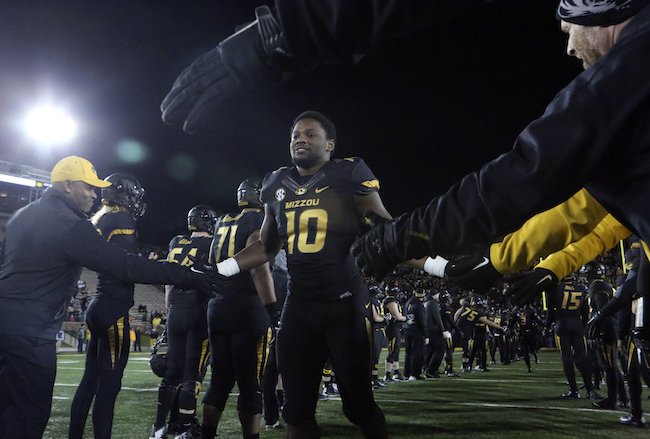 COLUMBIA, Mo. – Mizzou Football senior standouts C Evan Boehm (Lee’s Summit, Mo.), LB Kentrell Brothers (Guthrie, Okla.) and OL Connor McGovern (Fargo, N.D.) have all accepted their invitations to the 2016 Reese’s Senior Bowl, as announced Tuesday. The Reese’s Senior Bowl is slated to be played on Jan. 30, 2016, at Ladd-Peebles Stadium in Mobile, Ala., in the heart of SEC Country.

Boehm, Brothers and McGovern have accomplished a lot in their time at Mizzou, winning the 2013 and 2014 SEC East Division Championships and 23 games over those two seasons. Mizzou’s senior class also  was ranked among the top 25 for 21 weeks and earned wins in a pair of January bowl games (2014 Cotton Bowl, 2015 Citrus Bowl) while turning in two of Mizzou’s six seasons with 10-plus wins (12 in 2013, 11 in 2014).

Boehm, one of four senior captains for Gary Pinkel’s 2015 squad, has been the cornerstone of the Mizzou offensive line over his four seasons. He has started 51 consecutive games and 39 straight at center. His first 12 starts came at guard as a freshman. His 51 starts are a new Mizzou record. Boehm was a preseason All-SEC honoree and earned spots on the Rimington and Outland Trophy Watch Lists this season.

Brothers has blossomed into the nation’s most productive linebacker this season, leading the nation in tackling (140) and tackles per game (12.7). His 140 tackles are the seventh-best single season total at Mizzou and he is the first Tiger to break 100 tackles in back-to-back seasons since NFL First Round Draft Pick Sean Weatherspoon (2008-09). Brothers is just 24 tackles shy of the Mizzou school record (164 by Travis McDonald, 1994) and is the first Tiger under Pinkel to post six consecutive games with 10+ tackles. He has more than 10 tackles in 10 of Mizzou’s 11 games. Brothers does more than just tackle as he leads the team with two interceptions and leads the nation with three blocked kicks. He has added 9.5 tackles for loss, 2.5 sacks, two pass break-ups with a forced fumble and fumble recovery.

McGovern, much like Boehm, has been a staple across the offensive line during his career at Mizzou. He has played in 47 games over the last four years while starting 38 straight, moving to left tackle this season. Billed as the strongest guy on the team, McGovern holds several weight room records at Mizzou and is a two-time SEC Honor Roll member with a likely third coming in 2015.