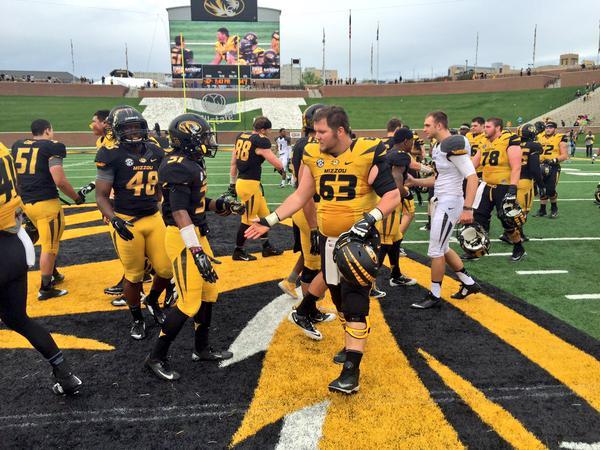 Football was back in action in The ZOU Saturday, April 18, and the atmosphere was just as electric as ever. Gary Pinkel’s squad gave the crowd of 30,000-plus a reason to cheer as the 2014 Mizzou seniors were recognized at midfield. Hundreds of MizzouMade players, including NFL stars like Jeremy Maclin, Brad Smith, Sheldon Richardson, and Tim Barnes were in The ZOU to catch up with their Mizzou family.

It was the first team defense that came up big to begin the game, with junior defensive end Marcus Loud getting a sack to end the first series. The second team offense would get it going later though. They drove down the field and made some impressive individual plays in the first quarter, including a one-handed catch and run by senior tailback Tyler Hunt on a screen pass.

But the 1’s wouldn’t be outdone. Senior tailback Russell Hansbrough rushed his way to a first down and sophomore tight end Jason Reese hauled in a 12-yard catch from junior quarterback Maty Mauk to set up a field goal. Senior placekicker Andrew Baggett, who’s had a strong spring season, put a 36-yard field goal through the uprights to make it 14-3 after booting a 65-yard punt earlier in the quarter.

Following the first score of the game, the 2’s responded with a drive of their own. A back-shoulder pass from sophomore quarterback Eddie Printz to sophomore wide receiver DeSean Blair resulted in a 20-yard gain, and highlighted the drive by the second team. The drive ended on 4th and 1 when junior defensive lineman Harold Brantley dropped for a 2-yard loss.

Mauk looked impressive in the next series, hooking up with senior wide receiver Wesley Leftwich on a nice out-route while on the move for a 14-yard gain. Mauk would also scramble his way inside the 5-yard line in the 2-minute drill, and capped off the series with a 4-yard fade to junior wide receiver J’mon Moore in the corner of the end zone for a touchdown. Mauk threw for 5-6 for 36 yards on the series, and also scrambled 3 times for 28 yards on the ground. His totals for the game were 9-14 for 68 yards, one touchdown and 6 carries for 40 rushing yards.

The Mizzou Football Family begins fall camp for the 2015 season the first week of August. You can buy tickets here to cheer on the Back-to-Back SEC East Champions in the fall.

Mizzou Made Players Reunite in The ZOU
Scroll to top