Mizzou is 4-0 this year on the road and have outscored its opponents by a total of 76 points. You know how they play away from Columbia, but do you know how they get there? As you’ll see in the video above, it’s a detailed process.

It all starts on Friday morning at Devine Indoor Pavilion with walk-through. After they go over all the plays that they plan on executing in the upcoming game, the team reviews the travel plan for the weekend.

Then it’s on to the team buses and off to Columbia Regional Airport, where the Missouri Tigers charter a plane to their game day destination.

Once they arrive, a police escort guides the buses to the hotel. At the hotel, the players pick up their room keys, get situated and head to team dinner.

After chapel service, meetings, and visiting time with family, it’s off to bed. For a morning game such as the one in Kentucky, the team eats breakfast at the hotel, loads up the buses and heads to the stadium.

After Mizzou takes care of business, the Tigers briefly celebrate their victory in the locker room, and the “P.O.P.” chant breaks out, which means “party on the plane.”

Now of course, Mizzou doesn’t actually party on the plane. That’s just the players’ way of saying that it’s going to be a happy trip home. And it is indeed, as the coaches and players are all smiles on their flight back to good ole CoMo.

To give you a detailed idea of what the team does on the road, below is the itinerary from the game in Lexington, KY: 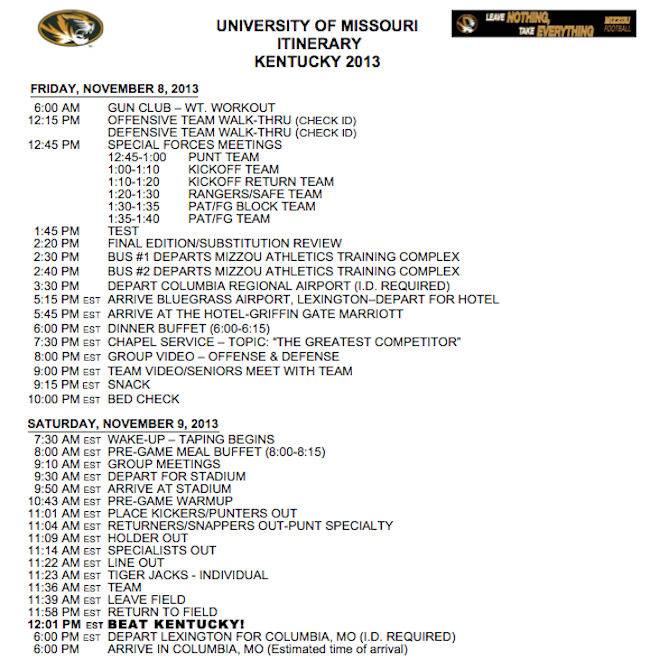