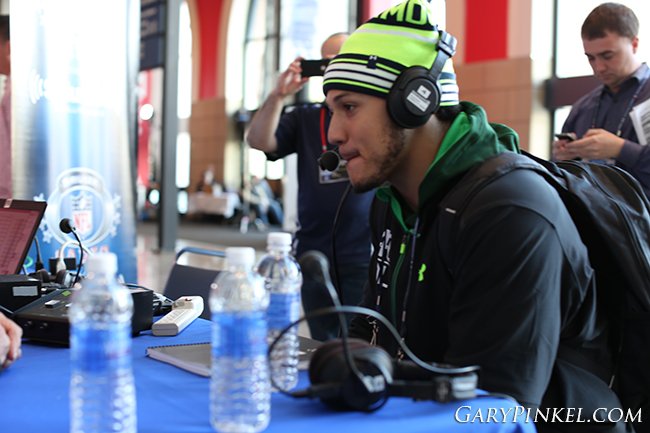 class=”p1″>Mizzou Made defensive end Shane Ray is one of the most decorated defenders in school history. He earned SEC Defensive Player of the Year honors and broke Mizzou’s single-season sack record with 14 in 2014.

Ray, who is currently in Indianapolis for the NFL Scouting Combine, more than lived up to the D-Line Zou tradition at the collegiate level and is looking to do the same in the NFL.

“[D-Line Zou] is a sense of tradition and pride that was handed down,” Ray said. “To me, I feel like it was handed down from Sheldon Richardson, to Kony Ealy, to Michael Sam, to me and Markus Golden, and I think that what we do in college and what we do at the next level sets the tone for how great of a coach [defensive line coach Craig Kuligowski] is and what we can do as a program.”

Ray and Golden are looking to become the ninth and tenth Mizzou Made defensive linemen currently in the NFL.

Ray is expected to be one of the first picks in the 2015 NFL Draft. ESPN’s Mel Kiper Jr. currently projects the Jacksonville Jaguars to select Ray with the No. 3 overall pick. Kiper writes of Ray, “He’s a relentless disruptive force and is exactly the kind of player the Jags need.”

During his press conference at the combine, Ray made it clear he believes he can be an impact player at the NFL level.

“Well, personally, I feel like I bring everything you need as a defender to the table,” he said. “I play with a lot of passion and a lot of energy, and just—I’m really physical.”

Ray will be working out during Mizzou Football’s Pro Day on March 19.

Mizzou currently ranks in the top five nationwide of first-round picks since 2009, thanks in part to tradition of D-Line Zou excellence. Follow @GaryPinkel and @MizzouFootball on Twitter and Facebook for continuing updates on the NFL Scouting Combine.