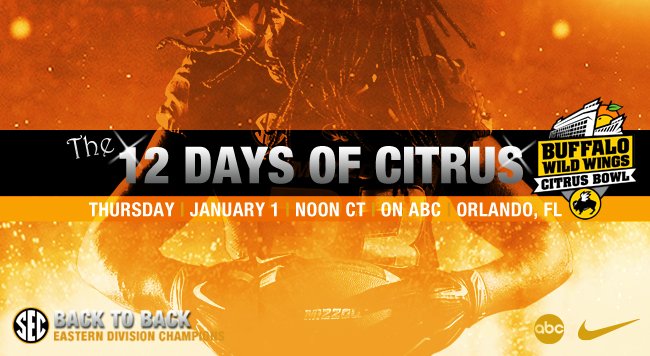 Coach Gary Pinkel and the rest of the Mizzou Football family are in Orlando to continue their preparations for the 2015 Buffalo Wild Wings Citrus Bowl, where Mizzou Football will take on the Minnesota Golden Gophers on January 1.

The game will mark Pinkel’s second time taking the field of the Florida Citrus Bowl Stadium. Before he was a coach, Pinkel participated in the game as a player. A former tight end at Kent State University, he played in the then-named Tangerine Bowl in 1972 under the legendary Don James.

Check GaryPinkel.com throughout the next two weeks for an inside look at the 12 Days of Citrus, which kicked off on Sunday, December 21, and lasts through the 2015 Citrus Bowl matchup. Each day of the 12 Days of Citrus will feature a different activity or event for the Mizzou Football Family.

Although the next week and half will be focused on being both physically and mentally prepared to participate in one of the oldest bowl games, the team will also take some time to enjoy Florida and all that playing in this historic game has to offer.

The Tigers will stay in the Hilton Orlando, located in close proximity to some of the city’s most notable attractions, including SeaWorld and Universal Studios. Tuesday and Wednesday, December 23-24, are free days for the student-athletes. On December 23, they’ll take a trip to Disney World and on Christmas Eve, they’ll be able to visit Universal Studios with their teammates.

While at the hotel, they’ll be able to take advantage of two pools, a lazy river, a water slide, and a whirlpool. The hotel also offers a full-service spa and fitness center, a nine-hole putting green, and several other recreational courts.

The student-athletes will start practice in Orlando on Christmas Day, as well as take part in various holiday church services. Two days later, each Mizzou Football player will team up with a Minnesota player to see Disney through a kid’s eyes again as the duos explore the theme park with young football fans.

December 29 is an exciting and busy day for the Mizzou Football family. The student-athletes will be able to take advantage of their “bowl gift”— a shopping spree at Best Buy. The day also marks the annual Futures Bowl, where redshirt freshman and young players will have the chance to test their skills against one another. Mizzou Football players can also choose to attend the Russell Athletic Bowl on December 29 to see Oklahoma and Clemson face off at Florida Citrus Bowl Stadium.

On December 31, Coach Pinkel speaks at a pep rally, where Mizzou Football fans in the Orlando area will be able to cheer on the Tigers ahead of the Citrus Bowl. There will also be a luncheon for the teams that day to celebrate their achievements.

GaryPinkel.com will be giving fans an in-depth look at what the players are up to during the 12 Days of Citrus, which kicked off on Sunday, December 21 and will lead up to the 2015 Citrus Bowl game. In addition to coverage of the team’s schedule, stay tuned for details on how the players stay fueled with a feature on the nutrition staff and a look at how Mizzou Football travels throughout Orlando with police escorts. Mizzou Football’s uniform for the 2015 Buffalo Wild Wings Citrus Bowl will also be revealed here on December 30.

The Tigers will take on Minnesota in Orlando, Florida, on Thursday, January 1, 2015. Kickoff is set for 12 p.m. CT and the game will air on ABC. Fans can follow Mizzou Football on Twitter, Instagram, and Facebook and listen in via Tiger Network radio affiliates for updates throughout the game.