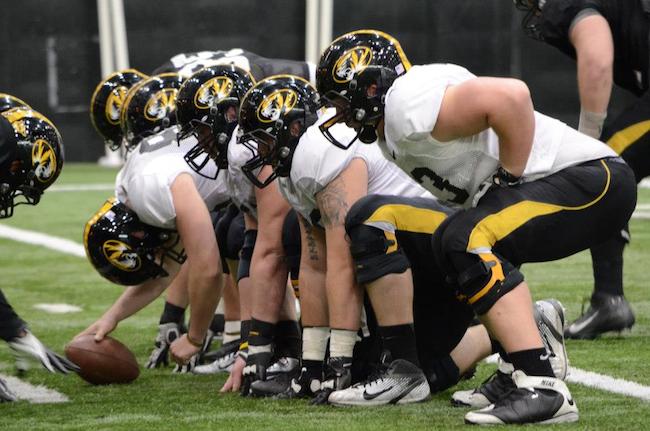 Enthusiasm is in the air in Columbia as the Mizzou Tigers start spring drills on Tuesday and take their first step in working toward a 2014 SEC Championship. Here’s a look at the seniors that will be leading the charge into the 2014 season.

Enters spring practice as the team’s starting punter after handling all of the punting duties in 2013. Averaged 41.1 yards per punt last season, had 14 punts of 50 yards or more, and pinned the opponent inside their own 20-yard line 26 times.

Dedicated, hard working walk-on who has contributed to Mizzou football for four years.

Veteran of the program who has played a valuable role for the offensive line for four years.

Hard-nosed lineman who will look to challenge for snaps in 2014. Has seen action in each of his three seasons at Mizzou and will continue to contribute this season.

High-energy athlete who will fill the void left by Michael Sam and Kony Ealy. Recorded 6.5 sacks a season ago and earned himself a spot on the honorable mention All-SEC team. Also returned an interception 70 yards for a touchdown.

Returning starter who played in 13 games in 2013. Made 41 tackles, four for a loss, and recorded three sacks. Has played in at least 11 games in each of the past three seasons and is looking to continue that consistency in 2014.

Big-play receiver who played in all 14 games a season ago, hauling in 22 catches for 253 yards and a touchdown.

Veteran lineman who provides quality depth for the offensive front five. Is listed on as  center, but can also play a number of spots on the line.

Athletic linebacker from St. Louis who has been a pivotal part of the program in his four years at Mizzou.  His uncle, Norris Stevenson, was the first African-American to receive a football scholarship at the University of Missouri.

Tough-minded and talented lineman who started all 14 games for Mizzou in 2013. Has played in at-least 11 games in each of his first three seasons, and his leadership and experience will be invaluable to the Tigers in 2014.

Speedy, shifty back who can explode for a big play whenever he gets his hands on the ball.  Played in all 14 games last season, carrying the ball 92 times for 601 yards and nine touchdowns. Also handled the team’s primary punt return duties.

Dedicated, hard working walk-on who has contributed to Mizzou football for three years.

Versatile talent who has an exciting combination of size, speed and athleticism. Started all 14 games in 2013, recording 44 solo tackles, one for a loss, while also forcing a fumble and an interception.

Multi-dimensional receiver who possesses excellent size, speed, hands and route-running abilities. Is looking to build off his strong 2013 campaign in which he caught 26 balls for 361 yards and a touchdown.

Big, athletic lineman who played in all 14 games a season ago, recording 34 tackles, five for a loss, 1.5 sacks, and also forced a fumble.

Versatile athlete who made the switch to cornerback from tailback prior to the 2013 season. Will push the starters in practice throughout 2014.

Seasoned veteran who started all 14 games at free safety in 2013, and 12 the season before. Recorded 89 tackles, 1.5 for loss, broke up seven passes and snagged three interceptions last season and will look to continue his stellar play in 2014.