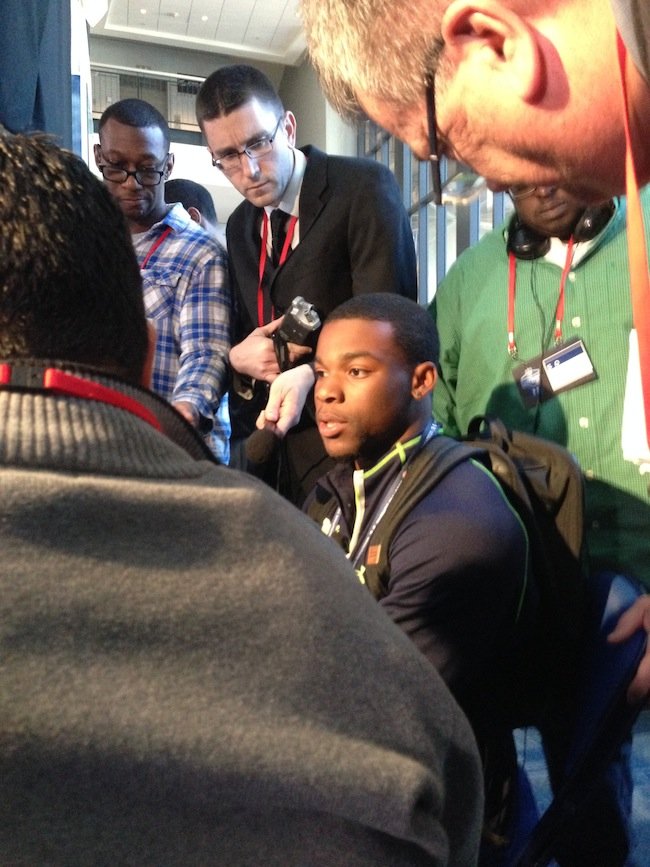 Cotton Bowl MVP Henry Josey caught up with Kat Lucchesi to share his experience at the combine thus far and what he’s done since the end of the season to prepare for it.

Like his teammates Justin Britt and L’Damian Washingtion, Josey was also training under the sun in Florida.

While in Florida, Josey got to train and hang out with teammate James Franklin, as well as go out to dinner with former Mizzou Tigers Jerrell Jackson and Michael Egnew.

The tests and drills done at Mizzou are very similar to that done by NFL teams. Because of this, the drills at the combine are like second-nature to Josey.

“Everything we did training there, it just reflects here so much,” Josey said. “It’s like, hey I’ve done this before, so it’s easy to me, and I don’t have to think about anything. I just come out here, do what I love to do and have fun with it.”

Josey arrived in Indianapolis at 11:30 on Thursday, and the thing he’s enjoyed most so far is meeting and hanging out with his fellow combine participants.

“There’s so many great players here, you’re around all these competitors that are just top notch guys,” Josey said. “So just being around them, and just having fun with them, enjoying the process of everything. There’s so many smiling faces. I haven’t seen a sad or mad person the whole time.”

And despite the smile that’s always on the running back’s face, he wants Mizzou fans to know that nothing can replicate the joy that they brought him during his four years in Columbia.

“Mizzou fans, I love you guys to death,” Josey said, “I really miss you guys and I cannot wait to come back and see you guys, The main thing I want you guys to know is, I’m always going to be a Tiger… I love Mizzou. M-I-Z Z-O-U.”

Josey completed his on-field work out Sunday afternoon and was a top performer. He finished in the top 10 in the 40-yard dash and bench press. Here are his full results: