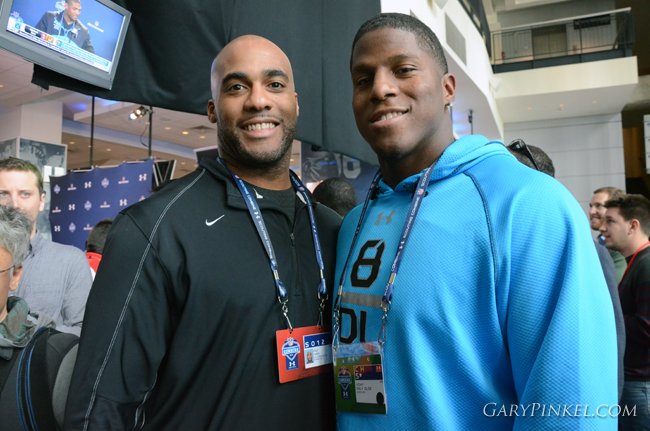 Amidst all the chaos of the NFL Combine, Kat Lucchesi was able to grab Mizzou Made defensive end Kony Ealy for a quick interview.

Like the rest of his Mizzou teammates at the combine, Ealy has been busy training since the Tigers’ Cotton Bowl victory on January 4th.

Coming out of high school in New Madrid, Mo., Ealy didn’t think he’d be participating in the NFL Combine four years later. But that isn’t because he didn’t think he was good enough.

“I thought I was going to be in the NBA,” Ealy said. “I was a basketball player. I loved basketball. But I chose to play football and I chose to put all my effort into it, and this is the outcome.”

Mizzou has had the most defensive lineman drafted in the first round since 2009, including guys like Aldon Smith and Sheldon Richardson, who was last year’s 13th overall pick. Ealy is looking to add another name to that list this year.

“Just to be amongst names like Sheldon, Aldon and Justin Smith is an honor,” Ealy said. “I just want to go out there and do what I can for everyone to see so people know that, at Missouri, we’ve got hard working people, and it shows, and it’s going to continue to show.”

When asked how Mizzou has helped prepare him for this moment, Ealy praised the coaching staff and their exemplary knowledge, because, thanks to them, his transition from college to the pros has been a smooth one.

“Everything they prepare us for, a lot of guys from other schools don’t have that, and when they get here, they don’t know what to expect,” Ealy said. “When I see something that I know we’ve been taught at Missouri, it kind of makes me feel at home.”

Ealy did his drills for the NFL combine from 9-11 a.m. Monday.

The Mizzou Made defensive end’s three-cone drill time of 6.83 seconds was the fastest among all defensive lineman. Here’s how he did in the rest of the drills: