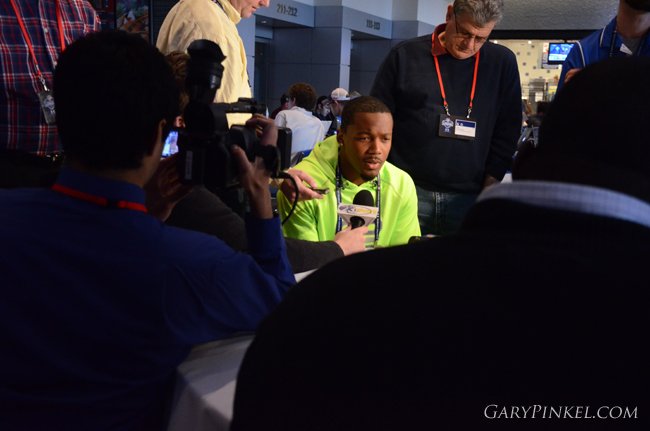 On Sunday, birthday boy E.J. Gaines sat down with Kat Lucchesi to talk about the Combine and what he’s been doing to prepare for it.

Since Mizzou’s Cotton Bowl victory in January, Gaines has been training at Fisher Sports in Phoenix, Ariz.

During his preparation, one thing has gotten him through the grueling drills and workouts: No excuses. It is Mizzou’s central motto, and it is the driving force behind everything we do. It is a philosophy that applies not only to football, but also to life. Gaines and his teammates don’t make excuses, and that is why they are competing and excelling at the NFL Combine.

The defensive back’s favorite part about the Combine so far has been all the free gear that he’s received.

“The shoes, the clothes, the hoodies, all that is cool,” Gaines said. “We got to go through the Nike store, the Adidas store and the Under Armour store and just check a lot of stuff out.”

Aside from all the new equipment he’s picked up, Gaines has been doing a lot of interviews since he arrived in Indianapolis. He says that the leadership skills and confidence he gained from being a captain at Mizzou have helped him nail each one.

And despite all the fun he’s having, Gaines has message for Mizzou Nation.

Gaines got 15 reps on the bench press today. He will not participate in on-field workouts Tuesday, but will take-part in Mizzou’s Pro Day on March 20 in Columbia, Mo.

Ingredients of a Self-Starter
Scroll to top