After a 58-14 victory to kick off the 2013 season, Mizzou Football Head Coach Gary Pinkel gives the game ball to running back Henry Josey. After coming back from a severe knee injury, Josey carried the ball 13 times for 113 yards and one touchdown in his return to The ZOU.

ESPN.com ranked the top 100 offensive and defensive players over the last 10 days, and the top 10 on each side of the ball were released today. Four Mizzouri Tigers made the list in total, all on the defensive side of the ball: Aldon Smith (10), Justin Smith (11), Sean Weatherspoon (86) and William Moore (93).

According to the website: “We polled 63 experts to rate each player on a 0-to-10 scale, with 10 being the best regardless of position in the NFL. Ties, as denoted by an asterisk, were broken by determining which player had more ballots with the higher number (if players are tied, the player with three 10s is ranked higher than the player with two 10s; if the tied players had the same amount of highest numbers — each with two 10s — we moved to the next number: three 9s beats two 9s).”

Aldon Smith is a third-year linebacker for the San Francisco 49ers. His 33.5 sacks in his first two seasons are the most in NFL history.

Justin Smith is a thirteenth-year defensive lineman for the San Francisco 49ers. Smith is a four time Pro Bowler and has allowed Aldon Smith to flourish in his first two years.

Weatherspoon is a fourth-year linebacker for the Atlanta Falcons. Since he took over as the full-time starter in 2011, Weatherspoon has defended 10 passes less than 15 yards downfield, second most among linebackers during that span, according to ESPN Stats and Information.

Moore is a fourth-year safety for the Atlanta Falcons. Since the start of 2010, Moore has intercepted or broken up 23 passes thrown at or beyond the first-down marker, more than any other strong safety in the league, according to ESPN Stats and Information.

These four Tigers represent the impressive lineage Missouri has to the NFL. To see more Tigers in the league, check out the NFL Pipeline page, and look for more season-long updates.

Missouri looks to improved to 2-0 all time against Murray State when the Tigers face the Racers in their season opener on Saturday evening at Memorial Stadium/Faurot Field.

In its second season in the Southeastern Conference – wildly regarded as the best in college football – the Tigers are attempting to bounce back from an injury-marred 5-7 season in 2012.

Missouri football is 627-523-52 all time, good for a 54.3% winning percentage, in its 122 years of existence. The 627 all-time wins ranks Mizzou 34th in the Football Bowl Subdivision (formerly Division I-A) history entering the 2013 season

Murray State finished 5-6 while competing in the Ohio Valley Conference in 2012.

In their one previous meeting, Missouri topped Murray State 47-7 on Sept. 2, 2006. That game marked the first career start for quarterback Chase Daniel, who through for 320 yards and five touchdown passes in the win.

Saturday’s starter at quarterback for the Tigers will be James Franklin, the senior from Corinth, Texas, who was named to the O’Brien and Unitas Golden Arm Award Watch Lists for 2013-2014. Franklin is coming off an injury-plagued season in 2012 that saw him suffer injuries to his head, shoulder and knee. He was one of the top duel-threat quarterbacks in the nation in 2011, amassing 3,846 total yards of offense and leading Missouri to victory in the Independence Bowl.

Also returning from an injury-raddled 2012 is star running back Henry Josey. Josey rushed for 1,200 yards in just 10 games as a sophomore in 2011. He led the Big 12 in rushing and ranked fifth nationally at the time of is injury. He missed all of 2012, and his return is a welcomed boost to Coach Pinkel’s potentially dynamic offense.

Speaking of dynamic, prized wide receiver recruit Dorial Green-Beckham returns to the Tigers spread a year older and wiser. The sophomore was widely regarded as the nation’s number one recruit in 2012, when he chose Missouri over Texas, Oklahoma and Arkansas. The Springfield, Mo., native has been named to the Bilentnikoff Award Watch List and Preseason All-SEC Third Team prior to this season. The 6’6, 225 pound Green-Beckham led the Tigers with five touchdown receptions as a freshman.

Senior defensive back E.J. Gaines will lead the defense. With cat-like anticipation skills, impressive foot speed and a nose for the ball, Gaines was his reliable self in 2012, leading Missouri with 11 pass breakups and recording 12 tackles in the win at UCF. Gaines earned First Team All-Big 12 recognition at cornerback in 2011, and was named to the Preseason All-SEC Second Team this summer.

Lining up in front of Gaines will be senior Andrew Wilson. The linebacker led Missouri in tackles the past two seasons, recording 79 stops in 2012.

After Tiger defenses make their stops, it will be up to return-man extraordinaire Marcus Murphy to gain field position. Murphy earned Second-Team All-America honors from Sports Illustrated in 2012 after posting 1307 total yards and four touchdowns. The speedy Murphy, from DeSoto, Texas, was named a Preseason First-Team All-American by Sports Illustrated and Preseason All-SEC by conference coaches.

Maikhail Miller – The sophomore transfer from Mississippi earned the starting quarterback job out of camp over junior Parks Frazier. Miller is a duel-threat who threw for 1,636 yards and rushed for 1,148 yards (36 total touchdowns) as a senior at Itawamba Agricultural High School in Mississippi.

A former Division II National Player of the Year, Hatcher has garnered an overall record of 112-42 in his 13 years as a head coach. His wide-open style offense, known as the “Hatch Attack,” has bolstered three of the top five passing offenses in school history and set 21 single-game records in his tenure, which started in 2009. However, the executor of many of Hatcher’s game plans, Casey Brockman, was signed by the Seattle Seahawks in April. Hatch Attack will have to work under a new quarterback in 2013.

WITH A TIGER VICTORY

Missouri would start 1-0 for the 12th straight season, improving Pinkel to 12-0 in his last 12 season openers. 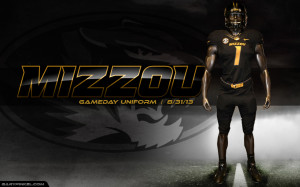 Every game week on Thursdays at 6:00pm, GaryPinkel.com will release the uniform combination for the upcoming game. It is tradition for the Mizzou Football Senior Class to choose what the team will wear throughout the season.

The Tigers will run out of the tunnel in The ZOU on August 31, 2013 wearing the Mizzou Nike Elite combination of the black jersey, black pants, and oval tiger head helmet.

Senior quarterback James Franklin has looked very comfortable in his recently announced starting role. Part of the improvements Franklin has made are his focus on being more vocal. Franklin spent last year and this summer working on those skills, and with the help of his teammates’ encouragement he has become more confident as a leader.

Watch as Franklin talks about these improvements, and his excitement about the first game of the season, and getting back to a bowl game.

The Mizzou Football experience will be markedly different from last year, both on and off the field. On the field, junior running back Henry Josey returns from a season he spent rehabbing a knee injury that kept him on the sidelines.

While Josey was working and rehabbing to improve his game, Memorial Stadium was improving too. Renovations to the East and West sides of the stadium look to give fans an even better game day experience. Part of these renovations includes a new and improved press box.

Watch below as Josey takes a tour of the new press box and shares some insights on the upcoming season.

Leadership is crucial for any team, program or organization to be successful. Many young players don’t fully understand what it takes to be an effective captain or leader, and that’s why Missouri Football Head Coach Gary Pinkel entrusts his seniors with that responsibility.

“The seniors are kind of sacred here,” Pinkel says. When you become a senior in January of your junior year, all of the other seniors are gone, and now it’s kind of your team.”

And the seniors embrace that role. They’ve been here for three years, and they know how the program is run. They know what the coaches expect, and what it takes to win at the highest level of college football.

Because they’ve paid their dues and shown a full commitment to the Tiger football program, Coach Pinkel trusts them to share information and ideas that they think will contribute to the team’s success. They are in constant communication about what they can do to bring the team closer together and create a family atmosphere.

“It’s very difficult in any organization to reach your highest goals if you’re not close, if you’re not a family, not a team,” Pinkel says.

To help achieve that closeness, Pinkel hosts family senior dinners at his home a few times throughout the season. At these family gatherings, coach talks to his players about topics such as the upcoming game, strategy, the week of practice and his expectations of them as leaders. In addition, the seniors get to give their feedback on anything that they think is relevant to the team’s success moving forward.

Last year, the Tigers had a great senior class led by the likes of Elvis Fisher, Kendial Lawrence, T.J. Moe, Zaviar Gooden, Will Ebner, Kip Edwards and Kenronte Walker. Aside from the their obvious contributions on the field – the touchdown catches, first down runs, interceptions and sacks – to name a few, the aforementioned players were the unmistaken leaders off the field. Whenever an underclassman needed guidance or whenever the coaches needed to get a point across, it was those seven guys that they turned to. Whether it was vocally or by example, the 2012 senior class led the way for Mizzou.

Now it’s up to this year’s seniors, led by James Franklin, Andrew Wilson, L’Damian Washington, Marcus Lucas and E.J. Gaines, to take the reins, because according to Coach Pinkel, they have a tradition and duty to uphold.

“That leadership is real important to our program,” Pinkel says. “When you’re at Missouri, and you’re a senior, we really hold you accountable as leaders of our team.”